The first ever Positive After Combat Transition (PACT) Outdoors retreat, November 4th and 5th, was a big success. Veterans from all branches of the Armed Forces, both male and female, were welcomed to come and go, and participate in any or all events.

Project Healing Waters Fly Fishing proudly teamed up with Texas State University veteran groups, and Project Cohort, to serve disabled military veterans on campus and in our community. Leaders and helpers gathered in the pre-dawn hour to prepare for fly casting and a meal of breakfast tacos and coffee. Male and female veterans, most of them first-timers, cast their flies in a private lake, and in the scenic San Marcos River. Each participant was accompanied by and experienced fly fisher, and there were plenty of opportunities for fish photos . . . . with big smiles of course. Central Texas Fly Fishers was well represented with several of their experienced members showing up and lending a hand.

Texas Parks and Wildlife Department Area Chief, Vincent Lecca, supported us with equipment and his expert background in Angler Education. Many thanks to Don Ray, Chris and Stacy, and Jason George for their generosity in providing a beautiful Texas Hill Country venue at the Circle G Ranch and Tips Turf Grass Farm. This patriotic family avidly supports our area veterans.

Hays County BBQ has quite a reputation for lip-smackin’ brisket and mouth watering sausage and sides. Their amazing hospitality was on full display as they hosted us, and donated a delicious hot lunch for 50 veterans. We met on their covered patio, enjoying a great meal, and participating in meaningful discussion.

Command Sergeant Major Noe Salinas, a four time Bronze Star, and two time Purple Heart recipient, addressed the assembled veterans on the subject of coping and healing from combat stress. CMS Salinas is the Senior Enlisted Advisor at the U.S. Army Leaders Training Program, at Ft. Polk, Louisiana. He focused on positive ways to transition from military life into the civilian community.

Dr. Carl Van Aacken, a former Army Ranger with a 25 year military career, spearheaded the efforts on the T.S.U. campus. Blake Holbrook, served in the U.S. Army Infantry from 2002 till 2005. He is a Purple Heart recipient, a courageous overcomer, and leader in the cause to help veterans rehabilitate. These men are joined by a growing team of men and women, dedicated to providing creative and effective methods to reach out to veterans. Mike Hart, with Veterans Alliance of Texas State, and Burel Ford, with Student Veteran Programs, were instrumental in organizing activities for the day. James Lambert, with Veterans Guiding Veterans, also contributed to our success.

Veterans reached out to their brothers and sisters, on campus and throughout the community. They were tireless in their efforts, sending out emails, making phone calls, and walking the campus . . . . . making sure every military veteran was included.

Texas State University provided us with a meeting room for the afternoon session. The five person panel led a conversation style presentation. Attending veterans were encouraged to ask questions, and make comments, about their own struggles with transitioning to civilian life. Resources were identified and contact information was shared. The campus Veterans Affairs (VA) office was in attendance, as well as Hays County Veterans Services. As daylight faded, we again gathered on the San Marcos River, near the historic town of Staples, for grilled pork chops and overnight campout. A massive bonfire lit the night sky as we gathered on a gravel bar, to tell war stories and build camaraderie.

Later, as I lay in my tent, listening to the chirping and croaking of river critters and the sound of rushing water, a contentment washed over me. It was immensely satisfying knowing that my fellow veterans had benefitted from a day of healing and hope. We are family. 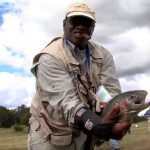