Frank Stevens Recognized for His Commitment to PHWFF

On May 12th, Frank Stevens received the Distinguished Service Award from the Project Healing Waters Fly Fishing Anchorage program.  Todd Desgrosseilliers, President and CEO of Project Healing Waters Fly Fishing, presented the Distinguished Service Award to Frank and several other volunteers who have been actively involved with the leadership of the Anchorage program since it began in 2010. Born in Anchorage in 1941 into an outdoor hunting and fishing family, Frank spent his summers on the Kenai Peninsula at a family cabin fishing and playing in the outdoors. Fishing equipment was very simple and shoulder to shoulder fishing had not yet arrived on the Kenai.

After high school Frank joined the U.S. Navy and served in Vietnam as a fire control technician sighting in the guns on the USS Princeton.  After service, he joined his family in Oregon where he learned floorcovering and later ran his own business. In 1977, the time was right to return to Alaska with his new family to his beloved Alaska.

Fishing and hunting was still a priority but was sidelined for 8 years while he coached his son and daughter on baseball teams.  With the short summers baseball is a 7 day a week activity. Bow hunting also captured his interest in later years and brought home bear, moose, caribou and deer.

In 2000 while doing some very necessary downsizing he found his father’s 9 foot bamboo fly fishing rod, a real treasure and over 75 years old.  He took it to a local fly shop and found they were teaching a rod building class.  His father’s rod was too valuable to him to risk using so he joined the class and built his first rod….the first of too many to keep track! That same year he joined Alaska Fly Fishers and as they say the rest is history.

Frank has never done anything half way. He took available classes on rod casting, rod building and fly tying.  He traveled to the lower 48 to attend classes at conferences and watch demonstrations.  By 2003 he was the fly tying coordinator for AFF and ran their monthly tying clinic which was open to the public. Over 6 years later in 2010 he helped get the Anchorage Program of Project Healing Waters started and has run their tying clinic ever since.  He never tires of sharing his skills, love of fishing and Alaska. 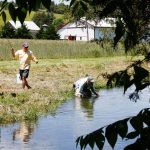