Bear Owings of PHWFF Charlotte, NC shares an update about a great fly tying class they held on November 16, 2017 at the Charlotte VA Medical Center.

HOOOOWEEEEE!! Did we ever have some kind of crazy fly tying class today! Started off with what seemed like a record crowd. We had several new faces in the group today.

Our volunteers moved directly into getting some of our new vets up to speed with some fly tying basics. Then somehow some freestyle fly tying broke out and there were some crazy looking flies that looked like a cross between an orange mop fly and a woolly bugger. Then onto some soft hackles lead by Jack Costa.

It was just plain fun to watch and even more fun to listen to. I feel sure that we didn’t produce any award winning flies today. But the general consensus among the group was that these crazy looking flies would catch fish. We made several new friends today, we learned some things about tying flies and we had a good time. So it’s all good!

Thanks so much to Jack Costa, John Robbins, Jim Mackey, Calvin Norton, Brad Parsanko and Bear Owings volunteering their time today. It was fun. Let’s do it again sometime. 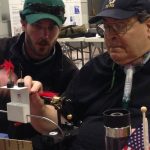 The Evergreen Hand: An adaptive fly-tying device (VIDEO)Announcements, In The News, Regional 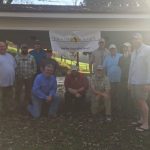