On August 25, the Johnson City Program of PHWFF was humbled and honored to receive a generous donation of $500 from the Unicoi County High School Air Force Junior ROTC Program in Erwin, Tennessee. The donation drive was the brainchild of our Program participant Jesse Davis’ granddaughter, Cadet Major Alora Roark. Jesse proudly let us know that Alora has received a “full ride” Academic Scholarship to the University of Tennessee next year!

The AFJROTC Program is lead and instructed by Air Force Colonel (Ret) Louis J. Kaelin. He and High School principal Dr. Amy Horton were on hand with a contingent of the class to present the donation to Army Captain (ret) Jera Anderson, Johnson City Program Lead.

Capt. Anderson spoke briefly with the class praising their efforts as well as expressing his Program’s gratitude and respect for these young servicemen and women.  He shared how their very important donation truly saves lives and heals broken spirits.

He also related how he and many other veterans are tremendously encouraged by young citizens like themselves who are stepping up to fill the ‘boots’ of those unable to continue the battle to protect our nation.

The Captain told them, “We old warriors never forget to look back, to see who “has our six,”.  We each know and acknowledge that we stand on the shoulders of giants.  We could not have accomplished our perceived ‘daring-do’ without knowing we had young giants such as yourselves standing ready to step onto the battlefield, pick up our swords and shields and carry on the fight when we would no longer be able.  We acknowledge and thank you.  We salute YOU.” 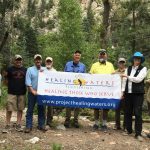 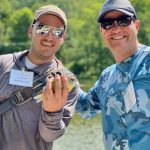