The weekend began with a streamside casting session, as fly fishers from Altoona, Erie and Pittsburgh PHWFF chapters arrived on Friday afternoon. Once everybody was assembled, they participated in a Patriot Parade from nearby Renovo to the event location in Cross Fork. The parade was led by fire trucks from the Kettle Creek Hose Company fire station, complete with lights and sirens. The procession was also accompanied by a group of bikers with the Altoona Chapter of the PA Combat Vets motorcycle club. “I’d never been in a parade, let alone one exclusively for veterans. People came out of the woodwork to watch and thank us as we went by”, commented “Tiger Mike” Larkins, a US Marine who served in Viet Nam. Barry Federov added, “People around here are real patriots. I can’t believe I got a parade. These people really get it”.

Following a catered dinner at the fire station, the veterans retreated to the nearby Kettle Creek Adventures Lodge for the night, their accomodations for the weekend.
Early on Saturday morning, after a hearty breakfast, everybody met at the stream to be assigned mentors. The mentors offered advice on locations, fly selections, and other fishing techniques, as well as assisting the veterans with duties such as netting fish when the veterans were successful. According to Jim Toth, with the Kettle Creek Watershed Association, “The mentors are out there netting, teaching, encouraging, and cheering on the vets. They all dedicate a weekend to be here, and ask to come back year after year”.
The action began quickly, with some of the veterans landing, and releasing, trout within minutes of stepping into the stream. They continued to catch rainbow, brook, brown, and one very remarkable tiger trout until retiring for the day.

After a bit of rest at the lodge, they returned to the fire station for the Kettle Creek Watershed Association banquet, where they again had a great dinner along with sharing stories and participating in raffles that benefitted KCWA in their mission of local stream improvements. One of the highlights of the evening was drawing the winning raffle ticket for a patriot-themed presentation fly custom tied by Tom Herr, who spends as much as 15 hours tying one single fly. While he donated the fly for the benefit of the veterans, he also expressed, “Veterans may not realize how much we gain from you. I give my sincere thanks to all of you for allowing me to spend my day with you”. Tim Bowersox also presented personally tied red, white and blue ornamental fly pins, to each veteran to be worn on their hats or fishing vests.

Other support was provided by Lively Legz, who graciously presented fully stocked fly boxes, packed with flies appropriate for the weekend, to all of the veterans for their use at the outing. Mike Saxton, founder of Lively Legz, said “I think Project Healing Waters gives veterans a chance to bond together, to talk, and to know that others are experiencing similar struggles. Seeing the veterans enjoying themselves makes us look forward to coming back year after year”. Flies, fly boxes, and other gear was also generously provided by Holsinger’s Fly Shop, Kettle Creek Tackle Shop, and Wet Fly Waterguides to each of the veterans.

All of the veterans, regardless of experience, caught multiple fish. One of the fly fishers actually caught trout on wet, dry, nymphs, and streamer flies, on what turned out to be her first fly fishing outing. Mentors got a lot of credit for guiding the veterans to success throughout the weekend. John Sodergren, an Army veteran, remarked “I’m really impressed with the mentors, they have to be really patient with some of us. I enjoyed just sitting streamside talking with them. They really want to be here with us, and I thank them for that”.

Besides the mentors, locals turned out in droves to watch and cheer on the veterans. The “Bridge Brigade”, a revolving group of locals, had a particularly good vantage point, directly above some of the fly fishers in the stream below. Their alternating cheers on a good hookup, and groans on a missed opportunity, kept the fly fishers entertained throughout the weekend.

Two of those locals who came out to volunteer were Bob Davis and Dave McIntyre, both Viet Nam veterans. Davis commented, “This weekend hurts when I think back, but it’s also healing to me, even though I’m not fishing. I have the feeling that somebody is beside me, and that’s healing for both sides”. Regarding the Project Healing Waters organization, McIntyre expressed, “How this group got created is the greatest thing going. We want to do all that we can to help”. Davis added, “I’d like to see the Project Healing Waters guys come back here every week”.
For some veterans, it was an opportunity to bond as father and son. Vern Dolby, in talking about his son Ben, said “In Ben’s younger years, he was rebellious and spent all of his time with friends; we missed out on a lot of time together. Now that we are both in this group, I get to be a part of his life again”. Ben Dolby added, “The outdoors was always part of my upbringing, then life happens. Now that I’m retired we have time to spend together fishing again”. 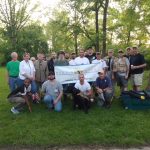 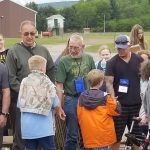