Learning at the Fly Fishers International Expo by Eivind Brendtro

It was enlightening to attend the classes at the Fly Fishers International (FFI) Expo.  The instructors were able with a few simple tools to significantly improve the students’ casting abilities and even enable them to diagnose and improve their own cast.

The first simple tool they used were two cones centered off the casters rod tip.  By using even acceleration and pausing at each cone the caster would let the fly line stop and lay out on the grass.  By analyzing how the line lay on the grass it could be determined if the acceleration was even.  After practicing until the line would lay in a straight line, false casts in the side plane were produced and line loops were observed.  Based on how the loops progressed would tell whether the acceleration and stop angles were still where they should be.  If the loop was too open the caster needed to increase acceleration, or if too tight slow it down.  If angles were incorrect the line would not flay out in a smooth straight line.

Another simple tool was to use a small foam block placed between the wrist and the reel seat.  The angler would hold it in place by steady even wrist pressure.  If the wrist broke during casting motion the block would either compress or drop to the ground.  If it compressed it meant that the wrist broke in the forward plane.  If it dropped to ground then the wrist had opened up in the reverse plane.  By practicing casts with the block in place a memory of proper wrist orientation was achieved.  After a few minutes the block could be removed with improved results.

Finally, the angler would practice his or her false casts starting as a side cast and then moving to an overhead cast, then releasing the cast to the grass.  Nice cast were now far easier to produce! The right angle nymphing class was also interesting.  Students were taught how to fish the deeper holes on the river where often fish would lie.  By using an adjustable bobber, small weights, and a weighted fly, those deeper holes could be fished most effectively.  This was practiced on the Gallatin River.   The bobber was adjusted to the depth of the water so as to allow the fly to just tick off the bottom.  The instructor suggested using a small simple weighted jig with a few strands of marabou feathers tied on.  These type of flies, when tied on with the hook oriented upwards made for less snags on the river bottom.

Mindful flyfishing was a wonderful way to learn to enjoy the sport of flyfishing even more than already enjoyed.  By stopping, taking ones time, and simply observing ones surroundings, made one more productive in his or her cast as well as more relaxed; improved fish hookups may even occur due to being more observant.  Although caching fish is the goal, enjoying all the aspects of that pursuit makes the whole experience more enjoyable.  This class was held on Spanish Creek. The water was crystal clear and after approaching the river quietly and observantly using all of one’s senses, students were taught to read the river for potential casting spots.  Then the target areas were attempted with deliberate, careful accurate casts.  This was done all the while taking in the beautiful surroundings of the river. Eivind, born in Minnesota, spent much of his growing up years in Norway, loving the mountains and streams of that beautiful country. Returning to the United States for high school, Eivind loved the desert and high Sierra country of California, enjoying fishing and hiking. Eivind enlisted in the US Army for 3 years as an NBC specialist, serving both stateside and in the DMZ in Korea. In 2003, Eivind reenlisted, serving the Alaska Army National Guard for 5 years as an aircraft/avionics electrician for Blackhawk helicopters, serving the state of Alaska and in other critical missions such as border patrol and Haiti. In 2009, Eivind enlisted in the Alaska Air National Guard serving in an Active Duty Guard (AGR) position for both C130s and C17s, serving missions including to Afghanistan. He attends the Anchorage Program of Project Healing Waters and enjoys rod building, making flies, and talking to other veterans. It has given him the hope that, while life may be different, there are still activities that he can do, people that understand, and hope for the future. 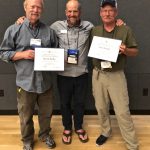 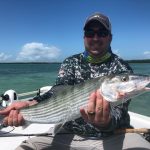 Fish with a Hero 2019Florida, Regional