As a way of recognizing the tens of thousands of volunteer hours given each year to Project Healing Waters Fly Fishing by our talented and caring volunteers, PHWFF Regions recognize one outstanding volunteer each year.  We are pleased to announce that Barney Kubisiak has been selected as Volunteer of the Year for the West Virginia Region. Bernard (Barney) Kubisiak, Jr., is a native of Pittsburgh, Pennsylvania, and a graduate of West Virginia University with a Bachelor of Science degree in Forestry. Barney is a veteran of the U.S. Army having served in Vietnam in 1967-1968 with the 2nd Battalion 94th Artillery.

His enjoyment of the outdoors led to his interest in fly fishing and fly tying. He is Past President, Vice President, and Treasurer of the Upper Ohio Valley Chapter of Trout Unlimited. In 2009 he became interested in Project Healing Waters Fly Fishing (PHWFF) and in 2012 founded the Wheeling, West Virginia PHWFF Program where he serves as Program Lead. Since becoming involved with PHWFF, Barney has organized and participated in local and regional outings, and has organized fly fishing and fy tying classes for the Wheeling Program. He has also taught fly fishing and fly tying to Boy Scouts and summer camp students.
In 2013 he started publishing Reel Vets Newsletter to let PHWFF members and others across the country know what the Wheeling Program is doing. He is active in the West Virginia Region participating in the West Virginia Regional Fund Raising Banquet and setting the ground work for establishing new programs in West Virginia. In 2014 Barney was appointed to the position of Deputy Regional Coordinator for the West Virginia Region of PHWFF. In 2015 Barney received the Legion of Honor Award from the Chapel of Four Chaplains Memorial Foundation for his dedicated involvement with PHWFF and its disabled Veterans.
He continually speaks before civic and private organizations about the benefits of PHWFF. 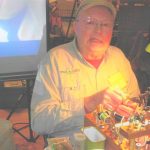 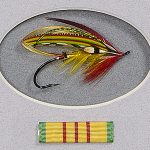 In honor of National Vietnam Veterans DayAnnouncements, In The News, Regional