As a way of recognizing the tens of thousands of volunteer hours given each year to Project Healing Waters Fly Fishing by our talented and caring volunteers, PHWFF Regions recognize one outstanding volunteer each year.  We are pleased to announce that Bill Frangos has been selected as the Volunteer of the Year for our Southwest Region.

Bill Frangos has been at the heart of the Albuquerque, NM program since we began almost nine years ago.  Bill leads an exceptional fly tying program that meets weekly five months a year (February, March, October, November, and December) and it is particularly noteworthy that Bill has not missed a fly tying session for eight years since we began in May 2009.  In addition, Bill teaches knot tying to our veterans and assists with casting every night he is available, and is a big part of our educational sessions where we teach wading safety, reading the water, aquatic insects, and rigging to name a few essential topics that fill in the gaps between tying, casting, and fishing.

Bill is an accomplished fly fisherman, fly tier and photographer known to his fly fishing friends as “Coach” because he is always willing to provide flies and help people on the stream. Bill’s enthusiasm infects others in our program.  As a veteran, Bill understands the importance of the program and he communicates with veterans in an easy manner, using humor to work through some of the tougher fly tying problems for new participants as he teaches a structured program of fly tying basics and advanced techniques.

Bill’s outgoing personality and generous nature draws veterans interested in fly fishing and tying and helps retain them in the program.  This success in and of itself meets one of the Albuquerque program’s and PHWFF’s basic goals, which is to engage veterans who need support and help with rehabilitation.  Bill has influenced at least three veterans to such an extent, and helped to start them on a path to happier and better lives as individuals and married partners, perhaps even saved their lives.  That is the most important element of our program and Bill Frangos is a larger-than-life part of it. 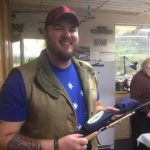 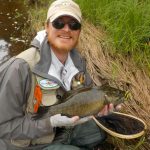