As a way of recognizing the tens of thousands of volunteer hours given each year to Project Healing Waters Fly Fishing by our talented and caring volunteers, PHWFF Regions recognize one outstanding volunteer each year.  We are pleased to announce that Bob Fryer has been selected as Volunteer of the Year for the Rocky Mountain South Region. Kiley is the Participants and Volunteers Lead/Coordinator for the Colorado Springs Program. Kiley started in the program as a participant in early summer 2014. She immediately volunteered for a position playing to her strengths of organization and paperwork. In June 2014 Kiley started as a veteran committee member, trip recruiter and progressed to planner and trip lead for Farish. Kiley became the Veterans Coordinator in October 2014. She retains that position and also took on Participant and Volunteer Lead in March of 2015. She works diligently to collect the data for our  Quarterly Report and ensures trip reports are completed. As Coordinator she recruits for all multi-day trips and has trained 2 assistant coordinators to assist for the single day trips. Kiley has instituted Bio’s & a trip tracking system for trips taken. As Participant and Volunteer Lead she has worked with our new trip leads/assistant trip leads to format a standardized approach to the paperwork, explain forms usage and answers questions. She has worked extensively with our graphics and IT personnel to update our website and flyers. Kiley is also instituting a Bio’s system for our volunteers to match jobs to expertise. She was a Mentor for Fly Tying 101 & 201, and supplies home baked goodies for most meetings/ classes. Kiley has worked most shows/booths since October 2014 alongside the Special Event Coordinator, and is a very able speaker when asked to speak at meetings. Kiley has been part of the planning committee since 2015, and has been trip lead and assistant trip lead on multiple trips in 2015/2016. She filled in most of the summer of 2015 as equipment manager when needed. She has worked closely with the Education & Training Committee to provide coverage/check-in for Casting/ CPR/ Fly Tying & Rod Building in 2015/2016. She re-vamped the Veteran’s Education/ Info Meeting & the Volunteer Mandatory Training and Trip Lead Training for 2016. Kiley was a participant in the 2015 rod building class, and assisted in instructing the 2016 class. If it’s a paperwork/ organizational question, Kiley usually has the answer.

Kiley was active duty Air Force from 1974-1978. Kiley was medically retired from the AF due to 3 HNP and the beginning of the Ménière’s Disease. She is a Vietnam Veteran as Kiley entered the AF 1 year prior to the official end of Vietnam (75). . She was an LPN and used her GI Bill to further her education and get her RN. Kiley was an Air Force military wife for 22 years, so she moved frequently with her ex-husband.

Kiley is the proud mother of 2 girls (Kayleigh & Kaitlin), and she is raising her 10 year old grandson (Paul Michael). Kiley is also the owner of record for the family’s Blue Great Dane and Boston Terrier (but it’s debatable who owns whom). Kiley was an ER nurse for most of the 24 years she was in the medical field, and was in the process of becoming a Nursing Instructor when the hearing loss/dizziness/tinnitus shut down her career. Kiley was medically retired from Memorial Hospital ER when her hearing loss progressed to >80%. She spent years fighting the disease and caring for her family. Kiley found yoga in 2013 and through an acquaintance at yoga, she heard about PHWFF in 2014. Kiley states “I joined PHWFF and found a sense of peace and calmness on the water, mainly through the Zen of fly fishing. I volunteered almost immediately to assist with paperwork> an ER nurse forte. I am a caregiver and love helping people, which used to involve shoving big tubes in people and now is focused on getting our program to run as efficiently and as smoothly as possible for the vets we serve.”

Kiley continues her other passions of yoga, reading, cooking and gardening in addition to her PHWFF activities 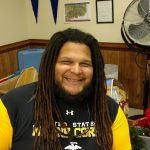 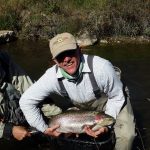