Before we get into the great week the Midwest crew had wet wading and slinging dry flies at Freedom Ranch, enjoy this video provided by Tim Norris of a beautiful Montana Rainbow trout being released back into the water.

Participants from around the PHWFF Midwest region had a chance to attend the Freedom Ranch for Heroes during the week of August 2, 2022.  This was an unforgettable experience for all who attended.   We all made friendships that will continue long into the future, and it looks like this experience will serve as a catalyst to develop some more collaborative outings between programs in the Midwest region.

We arrived at Bozeman just slightly behind schedule on August 2nd and were very happy to be able to meet Amy Milne at the airport.  Unfortunately, schedules did not permit us to hang out for very long. Shortly after, Tim Norris received a phone call from PHWFF West Virginia RC Bubba Holt, who was able to meet us for lunch at Bar 3 BBQ near Bozeman.  It was great to meet Bubba in person and hear about the adventures the veterans and volunteers have down in West Virginia.  We saw some pictures of very large muskys and smallmouth, and many of our participants left that encounter wanting to collaborate more with the WV region in the future.

After lunch we made the long drive to the Freedom Ranch for Heroes in Wise River.  It was amazing to finally see it in person.  I think we all had a sense that photographs could not do the facility any justice, and this was most certainly true.  The views were breathtaking and the facilities were beautiful… impeccably maintained, well stocked, and managed by some of the most hospitable people we’ve ever met.

Shortly after arriving we were lucky to have the opportunity to receive casting instruction from USMC veteran and legendary Montana fly guide Craig Fellin.  Craig was a great teacher.  He appeared to be genuinely impressed with some of our veterans’ casting abilities.  Almost everyone could benefit from a slight adjustment here or there, and all of our vets walked away from that exercise feeling confident and ready to fish the next day.

After casting we had our first meal at the ranch and everyone was extremely impressed with the quality of the food and the service.  After dinner, Joe Chovan, Speedy, and Tim Norris took a stroll down to the Big Hole River.  We caught a beautiful sunset and saw a couple of juvenile moose in the distance, and Speedy caught the first fish of the trip – a juvenile brown trout that took an elk hair caddis in a tailout in one of the braided channels behind the ranch.

The next morning Montana Reynolds drove the crew to Frontier Anglers to check out the fly shop and meet our guide for the day, Joseph Lema.  Our first stop with Joseph was to a local spring creek called Poindexter Slough.  Anyone who has spent a decent amount of time fishing spring creeks knows that the fish living in them can be selective and temperamental and the Slough was a real challenge that day.  USMC veteran Janis managed to catch a nice rainbow trout early on, but we did not see any signs of feeding fish after that, so Joseph made the call for the crew to follow him to the Beaverhead River.

The tailwater sections of the Beaverhead had a significantly higher flow than what we had seen on the Big Hole or the Slough.  The water was deep and fairly swift and required us to use a heavy drop shot nymph rig with a good amount of split shot.  Being from the Midwest, I was proud to say that many of our veteran anglers were already quite familiar with how to cast and fish such a rig, since something similar is often used for Great Lakes steelhead in the colder months of the year.  The fish were not exceptionally cooperative.  Speedy did manage to hook into a large rainbow, and an interesting situation ensued… the fish ate his fly, he set the hook, then the line went slack for a minute and tightened up again.  After a fight that lasted a solid 10 minutes, we finally got the fish in to see what had happened.  In the net was a mean 21” rainbow that had multiple hooks hanging out of his mouth already – hood ornaments from previous encounters with anglers.  Speedy’s fly somehow ended up attached to one of the hooks that was already in the fish’s mouth.  Joseph cleaned up the fish’s grill and released him safely back to the Beaverhead.  This was the last fish of the day.

On the trip home, Montana was an excellent tour guide, showing us several scenic locations on the way home.  Dinner was again excellent.

Thursday morning saw the veterans pairing up with the local guides for the first time.:

On Thursday, all of the participants and their guides fished different sections of the Big Hole, and everyone had success.  Janis Klonowski of PHWFF Rocky River caught a 13” grayling and Kim Lange caught several rainbows, browns, and brook trout.  Greg Witte and Dale Moravec caught several nice sized rainbows and browns in a lower section of the Big Hole.  Don Spock caught a large brown trout and Roger Dunn fought with a fish that his guide Matt described as a “monster” before performing the “long distance release.” Joe Chovan and Speedy floated through the beautiful spruce-lined Canyon section of the Big Hole.  There were a ton of spruce moths around and the fish were aggressively eating these.  Speedy and Joe were able to capitalize on this, catching several fish on dry flies, including a couple large ones.  The crew was pretty tired upon their return to the ranch.  Dinner was excellent, as always, and most of the veterans retired to their rooms shortly after.

On Friday all veterans remained in the same pairs and fished with the same guides.  This worked out well, as the groups already had some time to get acquainted with one another and their fishing styles.  Janis and Kim were back on the Big Hole, where Janis caught a beautiful brown, a cutthroat, and another grayling.  Kim caught several more fish of all species, and ended up winning the award for most fish caught during the trip (I believe 31).  Greg and Dale returned to the Big Hole as well and caught several more fish of respectable size.  Don Spock and Roger Dunn had another excellent day on the Big Hole.  Don caught a monster brown, in the 22-23″ range.  Roger got his redemption, with a couple nice fish in the net.  His guide Matt also noted his masterful knot untangling skills.  Speedy and Joe floated the Beaverhead with their guide Butch.  Speedy landed a very nice brown trout and lost another one that was so powerful it broke his rod.  Joe landed several nice fish throughout the day as well.

Friday night was the farewell dinner at the Wise River Club.  The food was excellent and the locals were extremely welcoming and respectful of our veterans and the sacrifices they made.  It was a really great wrap on an amazing trip. Montana Reynolds presented awards for the trip, which were greatly appreciated.

Upon returning to the Ranch the crew was in good spirits but contemplative, reflecting on the week they had.  Some participants were fairly open about it being a powerful and positive experience – owing to the beauty of the place and the quality of its fisheries, and also because of the great efforts of so many people who contributed time, money, or resources to make it happen.  Everyone was very thankful to the staff and volunteers at the ranch.

On Saturday all flights departed on time, all veterans made their flights, and all made it home safely.  It was sad to say farewell, but the crew vowed to stay in touch with one another, and I believe it is very safe to say this experience will never be forgotten by any who attended.

Thanks again to everyone at PHWFF, FRFH, and the Harbaugh Foundation for making this happen!  I genuinely do not believe someone could create a better environment or a better experience for a group of our veterans!  This was absolutely incredible from start to finish. 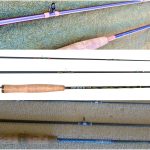 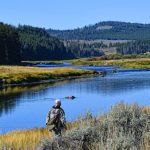