Recently, participants and volunteers from the Carolinas gathered in Fayetteville, North Carolina for the region’s seventh annual Marabou Madness. Organized by volunteers of the Fayetteville program, the event is an educational weekend for participants consisting of fly-tying and fly-casting instruction. The Pechmann Fishing Education Center facilitates the event perfectly with a large classroom with updated instructional technology and ponds stocked with many large trout from the North Carolina Wildlife Resources Commission who has been a principle booster of the Fayetteville program since its beginning in 2013. As participants arrive on Friday evening, the weekend kicks off with a fundraising dinner with a silent auction. During the dinner, supporters learned about the program from PHWFF CEO, Todd Degrosseilliers.  The gathered crowd then heard from retired LTC. Steve Delillis who chronicled his experiences while assigned to the Army’s Special Missions Unit in Mogadishu, Somalia known as the Blackhawk Down incident. After achieving the rank of Sergeant Major, Steve went on to attend the Physician’s Assist school and served 36 years before retiring. As a PA, he became deeply involved in Traumatic Brain Injury research for which he co-authored more than 20 articles on what is now one of the signature injuries of recent conflicts. From these experiences, Steve stressed the benefits to TBI patients working with organizations such as Project Healing Waters Fly Fishing as an important form of therapy. Special thanks goes to the American Armed Forces Mutual Aid Association headquartered in Fayetteville for sponsoring this event.

On Saturday, participants crowded in the Pechmann Center’s classroom for a full day of fly-tying instruction from Master tyer, Charlie Craven of Charlie’s Fly Box in Arvada, Colorado. Participants learned tie a variety of patterns to include; Charlie Craven provides one on one assistance with tying techniques

the Halfback Nymph, Bead Head Pheasant Tail, Duracell, the Renegade, and a Parachute Blue Wing Olive. Sandwiches from Jersey Mike’s for lunch courtesy of Blake Skarpalezos of Blake Contracting.  To break things up, many of vets competed in the Mystery Fly-tying Contest where they are provided a tying material that is unknown until the beginning if the 15-minute tying time. The day was ended with a BBQ dinner and Awards and Recognitions. Regional Coordinator, Tom Carpenter presented Fayetteville Volunteers with Certificates of Achievements.  The Charlotte program was recognized as the Region’s Program of the Year.

For the final day, veterans met on the Pechmann Center ponds for a fishing derby. The NC Wildlife Resources Commission tagged several fish during their stocking. These tag correlated to prizes that ranged from coozies to rod & reel combos. While, only a few tagged fish were caught, participants were still eager to hook one of the many 20 plus inch trout available in the ponds. Al Kress of the Winston-Salem program. Craig Person of Fayetteville with a nice Rainbow.

We thank all of the volunteers and participants of PHWFF for coming together for this special gathering. We thank the donors and sponsors who helped make this possible and Headquarters staff for all their behind the scenes efforts that are critical to mission success. Finally, we commend the volunteers of the Fayetteville program for their long hours and commitment to serving our community and veterans.

What makes events like this great is the gathering of people who share like interests and like experiences. With all of the inspiring interest in a Marabou Madness VIII, we say until, next year! 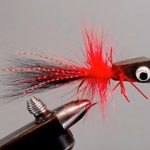 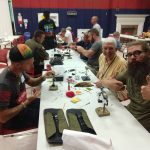 Staying In Touch With Each Other at PHWFF Coatesville … and BeyondPennsylvania, Regional