The North Carolina Region of Project Healing Waters Fly Fishing recognizes one outstanding volunteer each year as a way of recognizing the dedication and caring provided to Project Healing Waters Fly Fishing programs by talented and dedicated volunteers. We are pleased to announce that Tim Moore, Sergeant, USMC (ret) of the Winston-Salem, NC Program has been selected as the 2020 Volunteer of the Year for North Carolina.

Chris Wikel, Program Lead for PHWFF Winston-Salem, shares a bit about Tim Moore and his contributions below:

“Tim was born in Alaska, loving the outdoors from an early age. After serving in the Marines from 1972 to 1976, he started his own business as a Professional House Painter. He also continued to hone his God given artistic talents, which have grown to include oil paintings, calligraphy, wood carving, glass torch worked jewelry, soapstone carving, fly tying and many others. Tim also dedicated time through his church in those early years to teaching older boys/men primitive frontier living skills through a program similar to Scouts called Royal Rangers and Frontier Camping Fellowship. I have no doubt that many young lives were positively impacted by his efforts!

In 2013 Blue Ridge Trout Unlimited, whom Tim was an active member of, started a PHWFF Program in Winston-Salem, NC. Tim immediately got involved and, as Tim would say, this then became one of the most fulfilling endeavors of his life. While Tim takes part in all facets of the Program, from Trip Leader and Rod Building Instructor, fly tying is where his incredible skills have made a long-lasting positive impact on the Program and its Participants. During a very trying year, including a change of leadership and health issues of his own, he continues to find ways to selflessly give of himself. Over the years Tim has meticulously drawn up step by step handouts for tying class that eventually were made in to a 150 page book. This has not only been a great resource for our Program but has also been shared with many other PHWFF Programs around the country. Tim is also an active member of Blue Ridge TU and works as a judge at Casting For Hope fishing tournaments. Tim’s efforts during the COVID Pandemic have been incredible. While Tim is not a techie, he understood the importance of continuing to provide fellowship to our participants in a virtual environment. He has spent countless hours putting together 20 material packets (2 different flies, 40 packets per week) for each week’s virtual classes. These are then distributed to each of the tiers, even a few from other Programs. Remarkably as Tim was preparing to undergo double knee replacement on October 1st, he once again went over and above putting packets together, allowing us to seamlessly continue program classes through the end of the year. Commitment to the Mission? We would be hard pressed to find anybody else who has worked harder on behalf of our mission!” 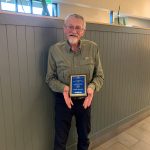