Yamsi Ranch is a 5000 acre working cattle ranch located in south Central Oregon on the headwaters of the pristine Williamson River.  The ranch has been in the Hyde family since 1911 and is operated by brothers, John and Dayton Hyde and their wives. The ranch holds five of the six springs that feed the amazing Williamson River.  The deep pools and undercut banks created by this slow meandering river, along with fallen trees, rocks and weeds offer incredible habitat for monster Rainbow and Brook trout.

In 2015 on a trip to the ranch, Robert Clark, PHWFF Assistant Program Lead from Salem, Oregon, and John would start what has become a family bond.  Since then, they have joined forces to set up an amazing opportunity for veterans to chase trophy trout on world class water.

This is the second year that the Salem program has hosted seven veterans of varying skills levels supported with one on one instruction from skilled volunteers.

Day one started with introductions and dinner with the Hyde family and members of the Klamath Country Fly Casters joining the veterans and volunteers.

After dinner, the veterans had the opportunity to get on the water for an evening of fishing. John, a certified casting instructor in addition to ranch owner, gave the group a casting lesson before sending the group to fish the upper river.

The next morning started with an amazing cowboy breakfast prepared by Dayton and Sally Hyde which fueled the group for a memorable day on the lower river, as the view was breathtaking.

Once geared up, the veterans with their volunteers headed out to different sections of the river in pursuit of fish, fun, and learning.  John made a point of getting around to each pair to impart some local knowledge and to get to know people a little better. You get a real sense of family on the ranch.

That evening was just as peaceful as the last with another amazing dinner and outstanding company. Before the sun dropped, a few of the veterans headed back down to the river to chase “the big one that got away”.  Upon returning to the ranch house, they were greeted with a roaring campfire and an opportunity to tell stories about some of their experiences and what the trip meant to them. There were smiles and there were tears and there was an expression of peace that a lot of them haven’t felt in a while.

The last morning was once again the crazy cowboy breakfast that almost gives you a food coma. With the guys loading their gear, there was a slight heaviness in the air. No one wanted to leave, and they didn’t want to say goodbye. They truly did not want it to end. But with lots of hugs and numbers exchanged people started to roll out one by one.

As the last one to leave I went up to John and gave him a big hug and told him, “We did it, brother.” We are truly grateful for the passion and love that the Hyde family has for Veterans, and I can’t wait for next year’s trip to be able to do it all over again. 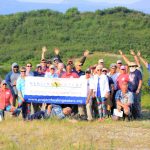 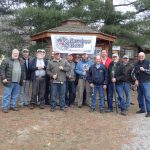