Many thanks to participant Gary Rihn for providing this summary of our recent event in Bedford County PA.

Twelve anglers from five Project Healing Waters Fly Fishing programs across PA recently met in in beautiful Bedford County for a weekend of fishing two local streams. This was the fourth time this event has been held, and it is always a favorite for veterans from across the commonwealth.

The veterans began arriving throughout Friday afternoon, and settled into cabins that would serve as their base for the weekend. Dinner was already supplied in each cabin, and just needed heated up on each veterans own schedule, allowing full flexibility. After most of the veterans had picked roommates, eaten dinner, and generally gotten moved in, a campfire was started and everybody started gathering.

Some of the veterans were old friends, others were meeting for the first time, while others were experiencing their first overnight trip with PHWFF. One of those on his first overnight outing was Chad Strickland from the Wilkes-Barre program. When asked about his expectations for the upcoming weekend, Strickland said that he was envisioning a day of fishing, socializing, and talking to other veterans. “It’s humbling; I’m grateful to be here, honored to be here. I never ask for anything, I never thought I’d be included in something like this”, Strickland said.

On Saturday morning the veterans traveled to Bob’s Creek, a smaller stream in the area, and met their guides from the Fort Bedford chapter of Trout Unlimited who were waiting for them at the stream. After introductions and pairing up guides with veterans based on backgrounds and experience, it was time to split up and start fishing. Due to a recent high water event, the fishing was harder than expected, but fish were still managed to be caught. When asked how his day was going, Chuck Kramer of the West Bradford program commented on his guides. “Not as many fish as I hoped for, but do we ever? The volunteers always make me better. They help refine my skills, my casting, my ability to read the water. I even learned the bow and arrow cast better today”.

One of those volunteers is Ryan Braman, the president of the Fort Bedford TU chapter. Braman was responsible for recruiting and coordinating the 15 volunteer guides for the weekend. “It’s a perfect combo of Project Healing Waters mixing with what we can offer as a chapter and as locals. We get to share pure fun with these guys”, he said. “It’s getting people newer to the sport, getting them whatever they need to succeed. Guidance, fish to the net, everything in-between”.

After a full day of fishing, the veterans returned to their cabins, where they found another catered dinner waiting in their refrigerators. After cleaning up, cooking, and sharing a meal at the picnic table, most chose to again spend the evening around the campfire, where more stories were told and bonds strengthened. An impromptu casting lesson even sprung up, where the PHWFF PA casting champion Ed Transue of the Wilkes-Barre program treated a few of the more eager veterans to some pointers and refinements on their casting techniques.

Sunday morning dawned with the threat of rain and storms, but the veterans were off to Yellow Creek regardless for another day of fishing, and another day of the fish not wanting to cooperate. During a break for lunch, a couple of the guides offered to give a short class on tenkara fishing to the veterans who had never experienced it, then allowed the veterans to fish with their tenkara rods to actually experience it. After lunch, two lines of thunderstorms rolled through, catching most of the veterans on the stream, and pretty much bringing the day to an end. Before ending the day though, Dwight Chrvala, a veteran from the Pittsburgh program, commented on how he spent the day passing time on the stream with his guide. “Besides talking fishing and casting, we talked about old music. Rock and roll. Bluegrass. Star Wars! Yeah, Star Wars! Dogs.” This falls right in line with PHWFF’s purpose of helping veterans to relax and heal.

After a shower and fresh clothes, the veterans were treated to a fabulous pizza dinner in the town of Bedford at the Horn O’ Plenty restaurant, owned by Jeff and Mandi Horn, who also own the cabins where the veterans stayed. This is the fourth year that the Horns have graciously donated their cabins and all of the meals for the veterans.

The stated mission of Project Healing Waters Fly Fishing is to be dedicated to the physical and emotional rehabilitation of disabled active military service personnel and disabled veterans through fly fishing and associated activities. Sometimes a veteran can get both at one time. After dinner, Pittsburgh program veteran Jim Leone looked back on the weekend. “I caught my very first trout on a fly rod this weekend. The only thing better is if it was on a fly I tied, but now that gives me a goal, to refine my skills”, said Leone. “This helps me stay calm. I’m a strong Type A, I need to focus my energy. It’s also great therapy for my hands, my dexterity. So, it’s a double benefit”.

Other veterans say PHWFF helps them in other ways. Chrvala said, “It helps me relax and reset, it gives me time off.” Kramer added, “It gives me the skill to utilize to go out and recenter.”

Strickland continued, “Now that I think I can catch a fish I’m even more excited to go fishing, and to try other things too”.

Greg Schafer, one of the TU volunteers, said he was surprised at the amount of involvement and emotions shown over the weekend. “It was a whole lot more than I expected. Here I thought I was the one giving whenever I offered to help out over the weekend; I was wrong, at least in my eyes. I feel like you were there for me instead of the other way around”, commented Schafer. “The level of concern and care for each other was amazing”.

Also noticing this was Amanda Thompson, Pittsburgh program lead, who was acting as the trip lead for this trip. Even though she has been a program lead for many years, and led numerous day outings, she had never been on an overnight trip with veterans, and able to experience them as they interacted on a more personal level.

Thompson reflected on the weekend, “It’s so overwhelming. I don’t know how you put into words what I saw this weekend. It was one of the most powerful things I’ve ever seen. Listening to the veterans tell their stories; one minute dead serious, next minute laughing, joking. I laughed and cried this weekend. It was very emotional. I wasn’t prepared for how overwhelming it was going to be. To be a witness to veterans’ lives changing for the better, it’s an honor.” 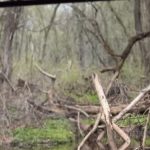 CSL Behring gets in the water to support disabled veteransAnnouncements, In The News, Mossy Creek Invitational, Pennsylvania, Regional 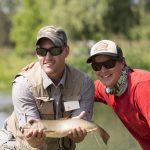