Pennsylvania Region announces their 2017 Participant of the Year

Richard Chisarick is a Vietnam Army Veteran who has been attending our program for over 6 years. Richard has an almost perfect attendance to all our sessions and is very willing to learn as much as he can about fly fishing. During the winter months he actively participates in fly tying and watching instructional DVDs. Whenever we are at an outing, Richard is usually one of the first on the stream and the last to come and eat because he is so involved with his fishing. Richard is very withdrawn but is starting to come out of his shell. It was my hope that with this recognition, he would realize that his participation was noticed and appreciated. While describing the winner, he started looking around a bit, and when I smiled at him and told him I was talking about him, he said he thought so. When he was announced as the Participant of the Year, he was thrilled, and all the other Veterans in our program were very happy for him. By his reaction, I think he will be more of an extrovert in the future. He is enthusiastically looking forward to next fishing season. 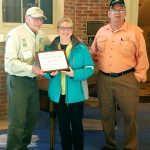 Pennsylvania Region announces their Volunteer of the YearPennsylvania, Regional 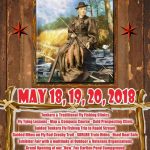