Many thanks to Erie Participant, Gary Rihn, for providing this summary of the day’s activities.

The 4th Annual “Project Healing Waters Fly Fishing: Fish With A Veteran Day”, hosted by the Altoona, PA program of Project Healing Waters Fly Fishing, was held on March 26th, 2022. Twenty PHWFF veterans were teamed up with 40 non-veteran teammates, one PHWFF veteran with two teammates on each team, in a day of friendly competition on a private trout stream in the beautiful hills of southwestern PA.

The weekend began with setting up the venue on Friday afternoon, in preparation for Saturday’s event. Dave Thomas, the long-time program lead for the Altoona program, created the event in 2017. “It began as a great way to get vets out with other people. They don’t always fish with people outside of their own group”, explained Thomas, when asked what inspired him to first develop the event, and what keeps him motivated to redoing it each year. He also said that he learned things each year, such as increasing teams from two members to three for more interaction, leading him to make changes each year to continually improve the event. Recent changes included pairing veterans with non-veterans instead of with each other as had been done in the past, which everybody enjoyed and agreed suited the purpose of the event better. A last minute change this year was also universally well-received by everybody in attendance. Rather than an official competition with every fish being measured, recorded, and scores kept, this year was restructured into a “fish together” format, following the former layout of teams, time limits, and moving to different stretches of stream on a revolving 45 minute basis, but with no tape measures or scores sheets in sight. The event has become so popular over the years that there is now a waiting list for teammates, who make donations to PHWFF for their spots on the roster as part of the fundraiser aspect of the day.

Another lead-up to the event was the opportunity for some of the veterans to spend Friday night in a cabin together at the stream. Some were meeting for the first time, and quickly developed new friendships. Alan Gladish was one of those veterans, and had never participated in the event like this in the past. When asked for his thoughts in anticipation of the following day, he relayed, “I’m looking forward to getting out with great people. Everybody has been wonderful to me so far”, referring back to his three months in the Pittsburgh PHWFF program. He said that as a new fly fisherman, he was hoping to learn from more experienced teammates, watching them and asking questions. Another PHWFF veteran, Howard West, had fished the event multiple times in the past. Still, he had high anticipations for the upcoming day. “It’s always a good time, good people. The fish are just a bonus. I get to meet new people each year who help Project Healing Waters a lot, putting faces to names. It’s pretty cool to be able to actually talk to them, and to thank them in person”, West said.

Saturday morning started early with coffee and donuts streamside, a big fire to take off the chill of the falling snow, and the assigning of teams. After introductions, briefings on safety, and quick strategizing amongst teams, it was into the water for some fierce rainbow, brown and brook (there are no cutthroat trout in PA….) competition. The action started quickly, with fish being caught, and released, within minutes. One of the first fish caught was a beautiful 26″ brown trout.

The event was a little different than a typical event for PHWFF veterans where the outing group is strictly made up of disabled veteran program participants. This event was designed to invite non-PHWFF teammates to fish directly with the veterans. Beyond the friendly competition aspect between teams, the day was an opportunity for both groups to get together, fish alongside each other, share stories, and maybe learn not only a new fishing technique or new fly pattern, but also a bit about the disabilities that veterans deal with. One of the teammates that may have been more aware than most of what veterans sometimes deal with was Megan Turner. As a nurse at the Altoona VA hospital, she explained, “I came in blind, I didn’t think I could help anybody with fishing, but I had a blast last time fishing alongside these guys”. After a day of talking about the veterans’ service, her job taking care of veterans, comparing fishing experience and admiring some beautiful flies, both sides agreed that they had a lot in common, and were mutually supportive.

On the other side of the equation, the PHWFF veterans also were happy to offer their experiences with their teammates. Brian Kern, a recent transplant to the Pittsburgh PHWFF program from North Carolina, talked about fishing with his teammates. “I’m extensively into flyfishing, so we talked about tying flies, compared places we’ve fished, and all fished different strategies until caught fish then we changed to what worked”, he said.  Another PHWFF veteran, Fred Gutshall, had less experience. “I had no idea what I was getting into, fishing with a team, but I came out to learn”, he said. His teammates shared with him new fly patterns, how to rig his gear for the conditions, assisted him in tying his flies on when his fingers got cold, and introduced him to fishing nymphs. In between their turns fishing, he spent time waiting on the bank, sharing stories with his younger teammates of his experiences as a photographer in Viet Nam. At one point, Gutshall found himself worn out after a long walk and leaning against a tree along the stream bank. Two teammates from other teams came along, got under his shoulders, and helped him back to the fire. After a short warmup, Gutshall, who is 75 years old and has artificial knees, said, “I’m ready to go fishing, I didn’t come here to sit by a fire. Let’s go catch some fish!”

When the clock finally said that the last relay of the day was finished, the last teams climbed out of the stream, a little colder and a little more tired than they were at sunrise nine hours earlier. But everybody in attendance seemed to be in agreement that the bigger purpose of the day had been accomplished; sharing the brotherhood and sisterhood of a nice flyfishing stream, mingling two groups that are sometimes curious about each other and allowing those groups to share a casual day participating in personal conversations with each other.

Gladish reflected back, “Strangers handed me flies, helped me, took time with me. It’s very therapeutic”.  One of the teammates, Travis Bobik, who came out to spend the day on the stream with the PHWFF veterans commented after the event, “It was great fishing with the veterans. We talked about the classes that they do with Project Healing Waters, about their fishing experience. It was nice just spending time listening to their stories”.  Another teammate, Todd Galebach, added, “It was a great time intermingling with all of the vets throughout the day”. Galebach had fished the event in prior years when it was set up more as a tournament. He said that he much preferred the new format. “The biggest thing here is the camaraderie. Now we have time to talk, slow down and catch up with each other”.

A major reason for holding events like this is to assist veterans is dealing with disabilities, both physical and emotional. West noted that for him, “I had 30 years in uniform, then one day I wake up and I’m not a Chief. I had to find out who I was. Project Healing Waters helped me find my identity physically, mentally. You can’t just show up and tie flies, it’s an all-encompassing program. Look around, there are 90 people here right now, and every one of them cares”.  Gutshall added that in his case, he tended to not associate with groups. He said that “Conversations were all around me, but never at ‘my end’ “. After discovering PHWFF, he found other veterans in similar situations. Being a photographer, he had taken pictures of almost anything they had experienced, so they realized that they could relate and could talk openly. “When tying flies with Project Healing Waters, sometimes I just listen. For 40 years, I never had that”.  PHWFF veteran Howard West, summed things up after the event, “It was snowing, blowing, cold, and not real comfortable today. But I laughed until my stomach hurt. It was well worth standing in a stream, in the snow, to spend time with all of these guys today. Without a doubt”.

Project Healing Water Fly Fishing’s stated mission is it’s dedication to the physical and emotional rehabilitation of disabled veterans through fly fishing and associated activities including education and outings. Days like this go along way towards that rehabilitation. 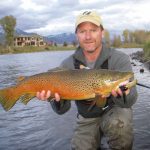 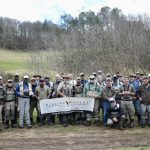