This year’s Fly Fishers International Expo was very special for those of us in Project Healing Waters Fly Fishing (PHWFF) for many reasons.  More than one hundred PHWFF volunteers, participants and staff were in Bozeman, MT for all or part of a week that was packed with educational offerings, our National Casting Competition and social events.

Tuesday was the inaugural FFI Leadership Development Workshop.  This was a full day program designed to provide information for experienced and new leaders of FFI councils and clubs that included several of our volunteer leaders.  Todd Desgrosseilliers gave a presentation about PHWFF & our strategic partnership with FFI.

Later Tuesday key leaders of PHWFF and FFI boards had dinner to get acquainted with the new FFI CEO Patrick Berry.  We were hosted by Sidewinders which was founded by a group of Marine veterans and featured on Diners, Drive-In’s and Dives. Also new this year was a PHWFF Casting Instructors Workshop all day Wednesday and Thursday morning with 20 students from all over the country: three regional coordinators, six program leads, National Program Director Larry Braswell, CEO Todd Desgrosseilliers and other volunteers and participants.   Workshop goals included developing and improving teaching skills and techniques, as well as diagnostic skills and techniques, and promoting consistency in teaching techniques.   We learned “The Six Essentials” and the “Six Step Method” as well as casting mechanics, faults and fixes.  There was also a session on Adaptive Casting Devices used in PHWFF programs.   It is a great course developed by FFI for our use to help PHWFF volunteers become better casting instructors.  Stay tuned for more information on its future availability.  Thank you to MCI Tim Lawson for leading this effort.

Thursday evening PHWFF volunteers and participants were treated to a BBQ by All American Beef Battalion of Ashland, Kansas.   The Battalion drove to Montana to prepare a “steak feed” for our group.   They hope to foster an appreciation, respect and honor for our Military Service Members whose sacrifices have, and will continue to make, our freedoms possible.  The food was terrific and plentiful, and we enjoyed getting to know these friends. After a day for practice and equipment check, the National Casting Competition was Friday morning.  This year there were 15 regional champions competing in the Cup Division and 12 regional runners-up in a new category, the Plate Division.   Compared to 2018, there were three more regions and more than double the number of casters.  Three of those who competed last year were back.   More importantly, the level of casting ability was dramatically improved this year.  Val Roberts won first place among the regional runners-up, followed by Mike Elliott, and Joe Hiney.   Lawrence Diggins of Long Beach CA repeated as the national champion with a score of 3420, with second place going to Christian Fritz and third to Mark Michaud.  Lawrence had two 91-foot casts.   For him, like so many others, casting has the same therapeutic value as fly tying or rod building has for others. This year’s judges were well known master certified casting instructors and/or tournament casters and included some who have placed in the World Casting Championships.   World casting champion youth phenom Maxine McCormick and her father Glenn were with us for the two days during which they wowed us with their very efficient casting and provided tips to many of our casters. Saturday afternoon Todd was interviewed James Thull, librarian of the MSU Special Collections for their Angling Oral Histories Project.  They have the world’s largest collection of trout and salmonids titles – more than 12,000.   Afterward, Todd was able to hold an original book signed by Izaak Walton in the 1600’s.

For the first time, winners of the PHWFF 2018 National Fly Tying Competition were invited to demonstrate fly tying along with 100 of the biggest names in tying on Saturday during the Expo.   Marcos Rico from Anchorage, Matthew Brown from Winston-Salem, Thomas Bowyer of Newport, WA, Franklin “Lee” Barbee from Marysville, CA, and Daniel Miller of Halifax, PA represented PHWFF. Saturday night was the farewell BBQ and Casting Awards Ceremony.   PHWFF hats were everywhere in the dining room and on the slides being shown.   This year’s Expo was a remarkable demonstration of how the partnership of our two organizations can benefit both.   The energy and enthusiasm on display will surely be taken back to our programs.

We hope that even more PHWFF volunteers and participants will join us for the 2020 FFI Expo starting July 20, 2020 in Bozeman.   This is an amazing opportunity to make new friends, become better fly fishers and improve our PHWFF programs.  There were 100 PHWFF participants and volunteers at the Expo this year – let’s double it in 2020!

A big thank you goes to all those who helped with this year’s National Casting Competition: the judges, scorekeepers, tabulators, local Program Lead Jim Wenger and many others, and to all the others who helped with various aspects of the PHWFF presence at the FFI Expo.  Thank you all! 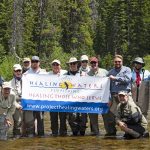