You can find the Quantico, VA Program on Facebook at www.facebook.com/QuanticoPHW

You can find the Fort Belvoir, VA Program on Facebook at www.facebook.com/BelvoirPHW

The 8th Annual PHWFF Fort Belvoir and Quantico Fly Fest was held at Harman’s Luxury Log Cabins in West Virginia over the weekend of November 30 to December 2. This annual season-ending trip started in 2011 with 17 people and has now grown to more than 90 this year. The numbers have grown due to the continued growth and development of new cabins at the location, with the completion of a new cabin in time for this year’s event.

Attendees started arriving at noon on Friday. Veterans and volunteers mainly from Virginia but also from Iowa, Ohio, Pennsylvania, North Carolina, South Carolina, Texas, Georgia, West Virginia, and New York. By the time everyone had checked in, there were 94 attendees representing seven PHWFF Programs. Friday is a time to arrive and catch up with friends that haven’t seen each other in at least a year and a way to welcome first timers to Fly Fest.

Planning for this year’s Fly Fest started soon after Fly Fest 7 ended and continued throughout the year. Marty Laksbergs, PHWFF Program Lead – Marine Base Quantico, does the bulk of the planning and starts lining up the details: coordinating the Ruritan Dining Hall for meals, working with Todd Harman to reserve the entire resort, and planning with Calvin Riggleman of Bigg Riggs Farms to provide six meals for the crowd during the weekend, starting with dinner on Friday night and ending with lunch on Sunday.

The veterans were paired with their volunteer guides at dinner on Friday night where they also were given donated equipment and each received a new fly fishing vest, donated from Mike Cherwek, former Program Lead at Fort Belvoir. This is the second year that Mike has personally raised funds for gifts for all those attending Fly Fest. Last year, everyone received a Yeti Tumbler. Back at the cabins, flies were being tied along with a lot of catching up with old and new friends.

Saturday morning started out drizzly and everyone hit the water after breakfast. The North Fork of the South Branch of the Potomac River was a bit high but cold and clear. The action was slow but persistence was rewarded as many veterans caught their personal bests. The fish were finicky, took a wide variety of flies and fought well in the cold 45 degree water. Up and down the river, volunteer guides did everything in their power to get a fish in the net including diving in the water to net a very large, escaping rainbow trout. The volunteers embody what Project Healing Waters is all about. Another volunteer guide worked with a veteran in a Track Chair which was borrowed from Serve our Willing Warriors (SOWW) of Haymarket, Virginia. This was made possible by a generous coordinated effort initiated by Andrea McCarren, former WUSA9 journalist who now works at PenFed. This special track vehicle enabled this veteran to fish the waters safely, experience the weekend and take in some nature therapy. Lunch was served around a campfire along the river as the rain gave us a break. We welcomed two guests during lunch from the Petersburg Interfaith Pantry who came to receive our annual donation to their food pantry. Marty started this donation five years ago by asking each person attending to spend $5-10 for non-perishable food pantry items. This year’s donation totaled 2,800 lbs. which brings the five year total donation to more than 12,000 lbs. This donation helps to restock the pantry during the holidays for the local community. The rest of Saturday was spent fishing and catching. Dinner on Saturday night was beef tenderloin donated by Ron Lentz of Athelstane, Wisconsin. Ron also donated $4,000 towards food for this event in memory of his son, Wayne, who was a supporter of PHWFF. Many of the veterans on the water were fishing with or wearing Wayne’s donated equipment. As is our tradition at Saturday night’s dinner, we hold a Volunteer Appreciation Night where each volunteer is given a small gift as a thank you for their dedication throughout the year. After dinner, it’s all about hanging out, talking fishing, watching college football and tying flies. This is when the bonds and relationships that start on the water are set. As a new volunteer noted, surveying all the camaraderie: “This is what I thought Project Healing Waters would be when I volunteered.”

Several veterans with a long drive ahead left after breakfast on Sunday, but most stayed and fished until lunch. The fish were tougher to fool on Sunday but most everyone caught at least one good fish.

At departure time a lot of hugs were exchanged with promises to return next year. Now the planning begins for Fly Fest 9!

Rick Warrington, who drove from Iowa to see his friends and donate three of his beautiful, award-winning fly rods to the equipment giveaway Friday night. Rick took 2nd place in the 2017 PHWFF Rod Building Contest and one of his rods was auctioned off for $3,100 at the 2018 PHWFF 2 Fly Contest at Rose River Farm. Ron Lentz, for donating 60 lbs of beef tenderloin and $4,000 to feed everyone at Fly Fest.

Todd Harman, owner of Harman’s Luxury Log Cabins, for his continued support of the Fort Belvoir and Quantico Programs and his generosity of donated cabins and items for our giveaway. Todd also directly pays for the  rental of the dining hall for the weekend.

Mike Cherwek, former Program Lead at Fort Belvoir, and dedicated supporter of Fort Belvoir and Quantico. Mike raises money on his own to provide a gift to every veteran and volunteer attending Fly Fest.

Calvin Riggleman and his crew for cooking and providing meals during the weekend. Calvin, a Marine Corps veteran, has been a committed supporter of our programs and this event, cooking for us since 2012. We could not feed this crowd without him.

Marty Laksbergs, Program Lead at Marine Base Quantico, who does the bulk of the planning and work on this trip; and especially this year’s efforts to find a Track Chair for a veteran to borrow and making all the logistics happen. I’ve said it before. Marty does the work and I take the credit. This arrangement works for us and I don’t plan to change it.

Trip photos can be viewed on the Facebook pages of each program: 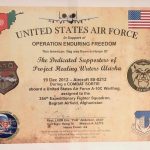 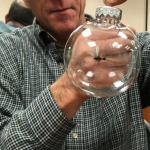