This was actually the first event for the Omaha program in two years because of the pandemic.

The Randy Naran tournament has been held in Omaha since the program started over six years ago. The tournament, named for well known football quarterback Randy Naran, who played at the University of Nebraska-Omaha, and was a huge supporter of PHWFF, is usually a three-day event.

“Basically the tournament in a three event affair,” Assistant Program Lead John Wright said. “We hold one event in Omaha, one in between Lincoln and and Omaha, and one in Lincoln. We used to get between 15 and 20 veterans at our tournament, but this year we only had two. We fully expect to see more at our next outing in July.”

In the first couple of years of the tournament, the grand prize to the winner of the tournament was a trip to Colorado. At the final event, there would be prizes for the 1st, 2nd, and 3rd place winners after totaling up the sizes of all the fish caught throughout the event. Because of the pandemic and lack of funding, the Colorado grand prize trip has been put on hold, but Wright says the prizes are still great.

“This year we are in a lot better shape then we have been in the past,” Wright said. “We have had several donations that make up some pretty significant prize packages including a complete fly tying kit, several totes of fly tying materials, as well as some rods.”

Because there were only two participants at the first outing, Wright is hopeful there will be a lot more at the final event to take a shot at these prizes.

In the past, the tournament would tally up the sizes of each fish throughout the events to determine the winner. This year, however, to make things a little easier, Wright said that they are going to just take the largest fish, and save some time and paperwork.

With only two participants on this last event, Wright said they just handed out hats and t-shirts and didn’t really worry about “winners”.

Although they plan to move forward with the tournament, Wright said they are more interested in getting the program back on track, and start moving forward with getting everyone back together.

“We are looking forward to next year,” Wright said. “We want to move the Naran tournament forward and also re-vitalize the Great Plains Bone Fish Invitational as well. I think we will be much better situated next year to proceed forward.” 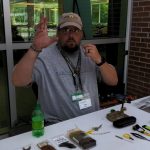 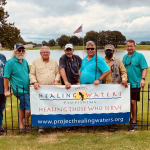