Many thanks to Daniel Miller, Harrisburg-East APL and PHWFF Ambassador for providing a summary of this year’s Pennsylvania 2 Fly event.

On April 30th and May 1st 2022, the Pennsylvania region of Project Healing Waters Fly Fishing welcomed the beginning of May, with our regional 2-Fly competition at the Ned Smith Center for Nature and Art in beautiful Millersburg, PA.  On Friday the 29th, Program Lead Glenn Klinger greeted the participants from Pittsburgh, Royersford, Erie, West Bradford, and Wilkes-Barre PA, as well as participants from the Harrisburg hosting chapter, delivering room keys and welcomed them to an evening dinner of pizza.  This represented a small step back to normality as the last year the event was held was in 2019, prior to the Covid pandemic. Reinstituting this event was eagerly awaited, by leadership, volunteers, and most of all by the participants.

April 30th 1st opened as a cool morning and participants were greeted with a continental breakfast and hot coffee. Participants were brought to their assigned beat of the Wiconisco Creek at 0700 and given the opportunity to fish the beat until 0900 after which they moved to an adjacent beat to fish till 1130. When the sun peeked over the tree line, it became apparent that the event was going to be successful. Many fish were caught and released, welcomed by the smiles and cheers of the participants and guides.

At 1130 the participants were greeted by Glenn and Kathy Klinger and served a hearty picnic lunch of burgers and sides at the Ned Smith Center. Team scores were collected and tallied by the guides and Glenn Klinger, as the Program Lead and host. One of the benefits and collective reasons for the event has become the opportunity to see the cheer and camaraderie that develops between the participants as they tell fish stories from the morning session around good food. After lunch the participants were led to their third and final beat for the Saturday session.  During the afternoon session the tallies of fish caught continued to climb and the scores narrowed on teams for first, second, and third place. At lunch the tallied fish equaled 57 total fish caught across 9 teams. The contest placing was for 1st, 2nd, and 3rd place of total fish caught and safely released, with a special category for the largest brown trout, rainbow, and brook trout caught and released. The last beat was fished from 1300-1630 providing many fish in the friendly competition. At the closure of the evening, scores were updated and stories were shared as the participants returned to their rooms at the Lyken’s Valley Golf course.  Dinner was shared at the Swing Restaurant on the premises.

The morning of May 1st opened with clear skies and open opportunities for the remaining beats. The participants were met again with a continental breakfast and introduced to their second rotation of guides. This morning, the participants were taken to their beat at 0730 and provided the opportunity to fish till 1130 when the final scores were to be tallied and the winners selected. Although the morning session fishing was slightly slower than the previous day, many fish were caught and released.  As the scores were tallied it was awesome to see every participant with a smile on their face.  Everyone had caught a fish. The total number of fish caught and released for the weekend was 112.

Lunch was served by Kathy and Glenn Klinger, an awesome Chicken Breast sandwich with picnic sides. After everyone had eaten, winners, prizes and bragging rights were delivered to the participants.

The largest trout caught for the weekend was caught by Daryl Mosher from Erie, a Golden Rainbow 21.5”, caught in the final minutes of the morning beat.

The largest Brown trout was a 17.5” Brown caught by Jonathan Rice from Harrisburg.

There was a tie for largest Brook trout of 16” but it was broken by Chuck Kramer from West Bradford having caught the most Brook trout.

The winners of these scores were presented their choices of donated rods to PHWFF Harrisburg.

The team competition winners were:

The third place team was Jose Ortiz and Gene Wolfe from Wilkes-Barre.

Each of the winning teams were presented generous prizes donated by the Ned Smith Center for Nature and Art and a plaque of the PA 2 Fly Event.

The entire Harrisburg-East Project Healing Waters Fly Fishing program and the PA Region would like to thank all the donors, notably Ned Smith Center for Nature and Art, Lykens Valley Golf Course, and the volunteers that gave their time to make this event a resounding success. 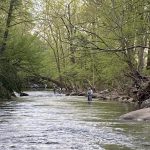 Murfreesboro, TN heads to Helen, Ga for fishing on the Chattahoochee RiverRegional, Tennessee-Valley 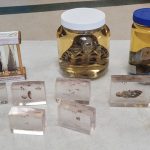 PHWFF Erie learns about the threat of invasive speciesPennsylvania, Regional