Teams of three anglers plus a guide fished the Rio Grande and the Cimarron over the two day tournament held October 23-24, 2021.  The Rio Grande and Cimarron are drastically different types of trout fisheries requiring different skills and mind sets.

The tournament is held to raise money for local trout habitat projects in Northern NM, and of course to have fun while being on a two day guide trip.  On day one, half of the teams fished the Rio Grande while the other half the Cimarron.  On day two, the teams switched waters so all teams fish the same waters.

At the last minute, Team Project Healing Waters Taos found out they would be down their third team member.  Louis and Ed along with their guide didn’t let that stop the team from fishing on.   After fishing the Rio Grande on day one, Team Project Healing Waters Taos was ahead on the leader board with 1850 points, Team Ryan AWOL Anglers closely behind in second place with 1775 points, and Team Christopher Pecos in third with 1425 points.

On day two, the team fished the Cimarron. At the end of the day, team Project Healing Waters Taos scored 1800 points. At the end of the day, all of the teams met up at the Taos Fly Shop to tally the final totals. The Taos Fly Shop is the main business sponsor of the tournament and a generous supporter of PHWFF.
As the leader board was updated and everyone did their best fast math, Team Project Healing Waters Taos were the winners by the small margin of 325 points.

That is the difference of one or two fish.  Congratulations to Ed and Louis, and what a way to represent the Taos program and PHWFF!   A fun time was had by all and the tournament raised approximately $4,500 for trout habitat on the Cimarron. Thank you to all the teams, guides Nick Streit, Ryan Stodell, Christopher Jenkins, Seve Gonzales and Charles Stafford plus everyone at Taos Fly Shop for your continued support of PHWFF Taos.  A special thank you to John Gould, Dwight Weber and Mike Olsen for donating the entry fee for Team PHWFF Taos! 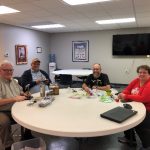 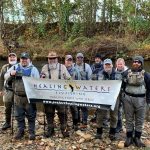