The PHWFF Tidewater, Virginia Program held double outings at the end of June, and they definitely made the most of it!

On June 23 and June 26, the program headed out Johnson’s Farm ponds in Suffolk, VA in search of some fish, and some fresh air.

On June 23, the PHWFF Virginia Regional Coordinator Bill Campbell, was a guide for new participant and brand new to fly fishing, Sadie Strong.

Campbell introduced Strong to the basics as well as a casting instruction, and she caught her first fish, a Redear Sunfish, on a fly rod!

Tidewater Program Lead Carl Allen said that largemouth bass and sunfish were all more than eager to go after their poppers, ants, and gurgler flies. On their second outing, they continued to catch anywhere from eleven to fourteen inch bass, and one readear just shy of eleven inches.

“Everyone caught fish during both outings,” Allen said. “On Wednesday, we had a little hot dog cookout for lunch which added to the enjoyable fly-fishing outing.”

Allen would like to thank Tim and his family at Johnson’s Garden Center for allowing them to fish their farm ponds, as well as Steve Tegtmeyer, the Tidewater Program’s APL for leading the Saturday outing. The program wanted to give the participants options in between kids and work to be able to attend.

Allen would also like to congratulate Sadie Strong on catching her first fish on a flyrod! 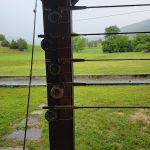 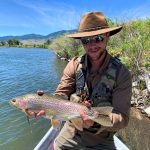