Pleased to report the DC Program had a successful outing to Rose River Farms on 8 May 2022.  Despite the awful weather the days prior, the precipitation stopped late Saturday night, and at 48 degrees Fahrenheit our Vets arrived at the Rose River Farm on Mothers Day.  Already present when the bus arrived were hard working volunteers setting up a banner, chairs, beverages, and reading the lines for the veterans.  Before the bus was even in park, Dan Sheesley jumped aboard, and cheers and laughter erupted upon seeing the former PL.  It was clear from the start, this was to be a special day.  Given this was one of the first major outings in two and half years, there was some catching up to do.  Pleasantries and hugs were exchanged, but our eager vets quickly entered the crystal clear water on Rose River Farms ready to catch some trout.

The morning started with lots of nymph takes, with most of the vets landing their first fish of the day before lunch.  Mid day, the group enjoyed a local BBQ lunch, generously donated by Paul Haughton, long time friend and enabler of PHWFF and the veteran community at large.  Shortly thereafter, George Gaines presented former PL Dan Sheesley with the Phil Johnson Leadership Award.  Dan is a Veteran of the US Army. He served from 1967 to 1970 as a Warrant Officer Helicopter Pilot (CW-2). During his service in Vietnam, he was awarded the Silver Star, two Distinguished Flying Crosses, the Bronze Star, the Vietnamese Cross of Gallantry, and numerous Air Medals. His disabilities include heart disease from significant Agent Orange exposure and hearing loss.

In 2017 a charter began to start a PHWFF Program based out of the DC VA Medical Center.   The NCC-TU President at the time, Tom Mann, called for volunteers to lead the new program, and Dan Sheesley raised his hand and stated that, as a Vietnam Veteran with a disability, he would be honored to work with George Gaines, then regional coordinator for PHWFF National Capital Region, and NCC-TU volunteers in establishing the new PHWFF program.

As the award was presented, many became teary eyed after a beautiful speech from George Gaines.  Dan’s remarks, unsurprisingly, acknowledged the volunteers around him, rather than himself, that made the TEAM successful (John Fenton, Tom Mann, Michael Abramowitz, George Gaines, Fred Michaud, and others) and the veterans that make it all worth it.

After the award, everyone was back in the water and the weather was quite incredible.  As the temperature warmed and the sun poked through the clouds, many switched to dry flies as Eastern Sulphurs, White Midges, and White Mayflies danced across the surface.  Again, most veterans caught multiple fish, many on the surface, including some for the first time!!  The youngest and newest disabled veteran in the DC Program caught his first trout, first fish on the fly, just as the afternoon came to close. 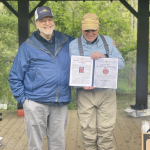 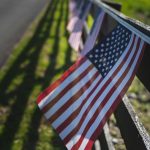 Memorial Day: A day of honor and remembranceAnnouncements, Regional