For many years, the Fly Fishing Show in Pleasanton, CA, has been one of the major events for our sport.  PHWFF Martinez has had the privilege of having a booth at the show for the last three years to generate interest and to raise funds through raffles.  Veterans man the booth and, in 2016, veteran Army SGT Shawn Coe was out front every day talking about the program and selling raffle tickets.  SGT Coe served two tours as a machine gunner in Afghanistan.  During his second tour he was severely injured in September 2012 by a suicide bomber while on a security patrol.  He was medevac’d twice: once in Afghanistan and then to Germany before being returned to the states for continuing treatment and beginning of rehabilitation. Shawn was an inpatient at the Martinez VA for TBI and PTSD in late 2014 when he discovered our program.  With a passion for fishing, but never having been a fly fisherman, SGT Coe got completely “hooked” on the unique sport, wanting to learn every aspect and detail.  Shawn built the rod that was raffled at the Pleasanton Show in 2016.  The same year he won first place in Category 1 of the national PHWFF competition for rod building; the year before in 2015 he won third place in Category 2.

Fast-forward to this year’s fly fishing show held in late February, and we again find SGT Coe at a booth.  But this time he is at the booth for The Drifter’s Lodge in Cooper’s Landing Alaska where he is a fishing guide (both fly fishing and rod/reel fishing).  In a little over 2 ½ years SGT Coe has transitioned from a severely wounded veteran to a being a guide helping others to fish.  He is a great example of the mission of PHWFF: the physical and emotional rehabilitation of disabled active military service personnel and disabled veterans through fly fishing and associated activities.   Shawn is shown in the photo making one of his Alaska clients very happy. And to put a little icing on the cake, we were visited this year by 10-year-old David Harrigans, a winner of one of the fly rods raffled in 2017.  David stopped by our booth to thank us, and presented us with his sketch of him using his new fly rod to pull in a big trout.  The picture his granddad later sent clearly showed the joy of an avid new fly fisherman. It was another great show.   We raised a few bucks, but more importantly, we helped to  spread the word about Project Healing Waters Fly Fishing. 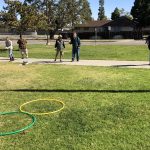 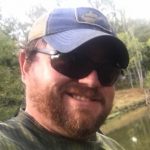