The 36th Annual Crosthwait Memorial Fishing Tournament and the Bradenton Yacht Club hosted the eighth annual PHWFF event on May 18, 2019.  PHWFF is a national non-profit (501c3) program that teaches veterans with PTSD and TBI fly fishing, fly casting, fly tying, and fly rod building.  It is helping heal the physical and emotional wounds of our veterans.  Fly fishers all over the country organize fly fishing activities in conjunction with the Department of Veterans Affairs Medical Centers and Clinics.  This program is promoted and supported by Fly Fishers International and its charter and affiliated clubs.

This year we had 36 veterans and PHWFF volunteers/instructors fishing on the water.  Twenty-two Florida captains provided their boat and guiding experience.    In addition to the returning captains we had several new captains.  The veterans were from local PHWFF programs in St. Petersburg and Tampa, Florida.  The volunteers were also from regional Florida PHWFF programs.

Robert Gause organized the day’s event from the 14 programs in the region.  Members of the Mangrove Coast Fly Fishers, the Suncoast Fly Fishers, the Tampa Bay Fly Fishing Club, Crosthwait Committee, and Manatee County fishing guides supported the event with many volunteers and boats.  Coffee and snacks were provided in the morning by the Bradenton Yacht Club and the veterans were assigned to a captain and volunteer.  After a brief orientation the captains, volunteers and veterans headed out to fish the Manatee River, Terra Ceia Bay, and Tampa Bay for 4 to 5 hours.   We could not have wished for a better day with minimal winds and a moving tide.  This year many fish were caught!  Catches included many large fish including snook, sea trout, redfish, flounder, mackerel, jack crevalle, grunts, and snapper.  The veterans returned to have lunch provided by the Anna Maria Oyster Bar Restaurant and exchanged their experiences.  Unlike previous years, the stories and sizes of the catch were substantiated with photos.  Those cell phone cameras are terrific.

Captain Mark Conner, Ray Adams (veteran from Bay Pines VA Medical Center), and I fished Terra Ceia Bay and Mark put us on fish which included snook, flounder, a jack, and a 27-inch redfish.  Volunteers from our Suncoast Fly Fishers included Alan Sewell, Ted Rich, Dennis Marquis, Dave Barson, Terry Kirkpatrick, and Tom Gadacz.  We had 6 veterans from our Bay Pines VA Medical Center.  Many thanks to those volunteers from Tampa, Sarasota, and the Bradenton surrounding area.  They have continued to support this event for the past 8 years.

We greatly appreciate the support of Mike Reeves who initiated and led the event for many years, the Bradenton Yacht Club, Annual Crosthwait Memorial Fishing Tournament, and all who volunteered their time and boats to honor our veterans.  It was a special day to fish with veterans who have served our country.  Many of the captains and volunteers were also veterans and it was great giving back to our fellow veterans! 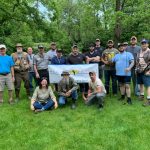 Trout Fishing The East Branch of the BrandywinePennsylvania, Regional 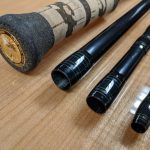