Leading up to our 4th Montauk Outing this year on September 7th and 8th, NOAA Marine forecast was calling for deteriorating tropical storm, Hermine, to produce 18 knot winds and big seas at the Point. Should we cancel? Capt. David Blinken, a co-leader of this event said, “No, the weather service is wrong”; fortunately, Captain David he was right! Steve Verp, David’s organizational partner for this trip, drove a group of Veterans and volunteers out East from the City on Wednesday in time for a group dinner at Montauk Point’s Harvest on Fort Pond Restaurant and following a sumptuous family style dinner, all rested in comfort through the generosity of the elegant Montauk Yacht Club.

Thursday dawned with just a few high clouds and surprisingly light breezes and after our traditional John’s Pancake House breakfast, we met the guides at Star Island where the flags hung fairly limp. Sure, as we turned east on the beginning of an incoming tide out of Lake Montauk, there were some big but smooth swells and, as we approached the famous light house, a few birds were wheeling and screeching over some busting False Albacore. David had suggested to the other Captains we head to the south side of the point to be more in a lee from the Northeast breezes where there were still more Albies showing and soon Nicko Gil, an Iraq Veteran on Capt. David’s boat, was into the first Albie of his life and to say he was excited barely suggests his joyful enthusiasm. In the morning, fishing was difficult with the Albies more down than up and feeding selectively. After lunch, the swells became smaller though choppier and, with regret, but wisely on behalf of new and first rate participating Captain Merritt White, our two female Veteran-participants, Frankie and Rochelle returned to the Star Island Marina for recovery on terra firma because of sea sickness.  But before any discomfort set in, our volunteer coordinator, John Enochty, the mate on Merritt’s boat, was thrilled to hook-up with Albies. Therefore, though not hooking an Albie, our participants witnessed the incandescent beauty and remarkable power of a magnificent False Albacore. Observing the battle, Capt. David radioed over, “Tighten the drag or we will be here till tomorrow”. David’s friend and longtime East End angler, Arthur Romain, a Marine Veteran, had co-leader Steve Verp and Vietnam Veteran Jim Mulligan aboard and Jim also hooked a fish spinning a 100+yards of backing off his reel in the blink of an eye. This is what they do but they also turn and run back throwing slack into the line and Jim’s Albie performed this tactic resulting in the fly dropping free. No doubt, the Albie was delighted and Jim gained a valuable experience in addition to patient casting instruction aboard Arthur’s boat

By afternoon, the Albies with a few bluefish mixed in were increasingly active, staying up top for longer durations and behaving more aggressively.  You could watch bait leap clear of the water with blue lightning in hot pursuit. It was now a matter of getting a fly into their midst and commence stripping immediately, sometimes easier said than done as they are so fast, but if successful, they were increasingly willing to eat. Bob Moran, a Marine from the Vietnam era, hooked up but it was a bluefish and his tippet was quickly severed by Mr. Tooth. Then he hooked an Albie, raised his rod as if striking a trout and the fish busted off. He turned to me and said, “I think I am better suited to our Delaware River fishing”, where he had caught a memorable rainbow this past spring but I encouraged him to broaden his angling horizons in the salt. He said, “Show me how it’s done” and, luckily, one cast at the next busting group and an Albie ate the Jellyfish, a favorite fly tied the night before by its originator, Captain David.

Captain David had speculated that the storm rotating aggressively but increasingly off-shore could enhance our opportunities or push fish in-shore producing an above average day.  And, not surprisingly, his prediction was correct as it turned out to be a very memorable day. Between a bright, hot sun and bouncy swells we were a tired but happy group upon returning to the marina late in the afternoon when, following the customary group portrait we piled into the van for Steve to ably pilot us back to the City. Sated and tired, our group of PHWFF Veteran-participants and volunteers were left to reflect on our day together in a magnificent environment, amongst abundant fish.  In addition to receiving superior casting and technique instruction from the Captains, we also had time to share and bond. Our contented and connected group is ready to return with enhanced skills next autumn. 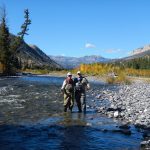 For these veterans, fly fishing trips can be a big part of recoveryRegional, Southwest 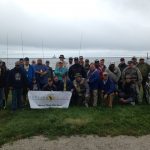