The Santa Barbara PHWFF Program did a trip to the Mammoth Lakes area for a fly fishing adventure August 17-21.

After arriving on Friday afternoon, we were ready to get out fishing, so we drove up to Lake Mary where there is often an evening hatch around the shoreline in late summer. We found a spot that looked promising and started casting large caddis flies that had been tied and sent to us from PHWFF participants. As evening settled in there was no hatch. No fish were rising anywhere on the lake. Once in a while, someone in a boat would catch a trout on power bait but not us.

Someone in a boat out in front us started yelling, “Watch out! There is a bear in the brush.” I looked down the shoreline as I was thinking, “I sure am glad no bears are in the brush near me.”  All of a sudden, a bear cub was looking out of the tall grass that grows around the lake. He was four feet away!! I moved back as far as I could and stood still. The bear nosed around the edge of the lake for a short time. As he did so I took out my cell phone and got a few pictures and Steven got a photo of the cub going up the trail. Luckily the Momma bear was several hundred yards down the shoreline. Saturday morning, we rented a boat on Lake Mary. Since there was not an evening hatch we decided to try the morning hatch. Saturday morning there were no major hatches that were bringing fish to the surface. At noon we packed it up and headed out to the Upper Owens River at a place called Monument. We started to catch some nice trout on woolly buggers. Again we found that there were no bugs hatching on the river so dry flies would not bring the trout up.

The next two days were the most productive. We fished with Crowley Lake guide Ernie Gulley. He has been a supporter of PHWFF and he is considered one of the pre-eminent guides on Crowley Lake. The first day we fished at a place called Sandy Point. Cody and Steven improved their roll casting and got pointers about fishing from a boat from Ernie. We were in about 15 ft. of water so our leaders were about 13 ft. below the indicator. That is a lot of line to manage when you have on two flies, split shot, and an indicator. Ernie kept count of fish landed and we had 30 fish to the net for a day of work.

On Monday we met Ernie at 7 am and headed out to McGee Bay. We repeated the process again for a great day of fishing with a few more fish to the net than the day before. Steven and Cody had it dialed in by the second day. In all we had a successful trip. Cody and Steven improved their trout fishing skills by fishing in lakes and rivers and caught some beautiful trout. As a group of veterans we developed a kind of camaraderie that we had experienced during our tours in Vietnam. It was a healing experience for all of us in that we shared stories, enjoyed the beauty of the Eastern Sierra Mountains, ate good food and caught some beautiful trout. 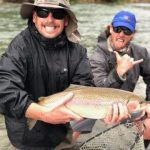 The Battle at Boxwood: Veterans find healing and community in a sleepy Colorado townAnnouncements, In The News, Regional, Rocky Mountain South 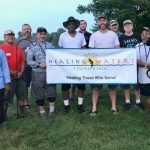