Five programs in the Southwest Region selected a competitor for the 5-Weight Combination Game Regional Championship.  They were Fabian Vargas from Taos, NM, Javey Derr of Fresno, CA, Juan Galvez, Phoenix, Terrence Lee, Tucson and Lawrence Diggins from Long Beach.  Unfortunately, just a week before the regional competition, Terrence had a medical emergency and had to cancel, as did his alternate.   We wish them both a speedy recovery.

The competition took place on Thursday, June 21 in Marina Vista Park, Long Beach.  Several Long Beach participants and volunteers came to help and cheer on the casters.   The morning began with a review of the rules by head judge Mark Tsunawaki, followed by a warm-up session. Each competitor cast two rounds and the single highest score determined the winner.  Juan with a combined score of 2460 and Javey with 2410 were a close second and third, but first place went to Lawrence Diggins with 3220 points.    His accuracy points totaled 1600 and his distance points were 1620 with two distance casts of 83 and 79 feet.   He was presented with a plaque and will be representing the Southwest Region at the Inaugural PHWFF National Casting Competition in August. Mark spent some time afterward offering tips for improvement and took questions.  Everyone seemed to have a good time and was enthusiastic about continuing to practice.   Because some of those from out-of-state had never had California’s own In-n-Out Burgers, we had lunch there before everyone headed home. This competition was a positive experience for those involved and these casters will encourage more participants to try the casting games next year. 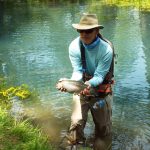 Veterans enjoy a remarkable day of angling at Westover FarmsRegional, The Heartland