Assistant Program Lead Jim Kissane of the PHWFF Kansas City Program writes about the Heartland Region’s Regional Fly Casting Competition and Champion: Steve Licata below.  The Inaugural Fly Casting Competition is being hosted in-conjunction with Fly Fishers International (FFI).  PHWFF and FFI, through the casting competition and their strategic partnership, aim to bring fly fishing and it’s proven therapeutic elements to more disabled veterans who can benefit from it.

The competition is open to disabled veterans and disabled military service personnel actively participating with PHWFF Programs and will be facilitated by volunteer-run programs around the country.  The Regional competitions will conclude in June, 2018 with winners advancing to compete in the PHWFF Casting Competition Finals during the Fly Fishers International Fair in Boise, Idaho August 8 – 11, 2018.

It has been a little more than two years since a chance encounter at Rainbow Fly Shop in Independence that brought Steve Licata and Project Healing Waters Fly Fishing together. A lot has happened in a short time.

“I walked into Matt’s shop and (the Project Healing Waters) guys were there,” Licata says. “That was about two and a half years ago, and I’ve been a part of it ever since.”

Licata’s success this year has earned him some good-natured ribbing from his fellow participants. “Mike Davis said I’m going to have to get a bucket of grease to put on my ears so I can get my head through the door,” he laughed.

Competitors in the casting competition were judged on distance, accuracy and casting around obstacles. Licata qualified for the Regional Cast-Off by winning the Greater Kansas City Program competition. Terry Adams of the Omaha Program finished as regional runner-up.

The National Fly Casting Competition will be a featured event at the Fly Fishers international Fly Fishing Fair Aug. 8-11 at Boise, ID. Licata will compete against other regional winners from around the country. In addition, another of our Greater Kansas City Program Participants, Donald “Doc” Ballard, has been selected to give a keynote address at the IFF Fair. Ballard, a Medal of Honor recipient, gave a keynote address at Project Healing Waters Fly Fishing’s National Two-Fly Tournament earlier this year.

Licata practiced diligently for the competition, receiving instruction from Gary Davison of the Missouri Trout Fishermen’s Association, from the staff at K&K Fly Fishers of Overland Park, and from Jim Rogers, concessionaire at Bennett Spring State Park.

“I had a lot of help, and I’m very grateful for that,” Licata said. “Gary helped me out a lot, especially with my shoulder. I’ve got a park about a block and a half from my house, and I just threw a hat out there as a target. It really was a challenge. It really surprised me doing as well as I did. It just all came together.”

“It was windy,” Licata said of the day of the competition. “There were gusts of 15-25 mph. What was nice was the grass was like a carpet, so you didn’t have to worry about the line catching and throwing off your timing. The wind was mostly at our backs, which was good. But you’ve just gotta take whatever happens. You only get one shot.”

There was a time, Licata says, when he might not have taken that shot. A fly fisher since the early 1980s, he credits Project Healing Waters with encouraging him to try new things.

“It has meant a lot,” Licata said. “When I came out of the service, there wasn’t anything (like Project Healing Waters), through the VA or anywhere else. I just muddled along in life.

“Being with these guys, the camaraderie, has really helped. It’s something I like to do, with people I enjoy being with. Like the rod building – I never would have built a rod on my own. When I’m working alone, I just can’t stay focused, but when I’m around these guys I can do it, even an intricate design. Normally, I would not have ventured out.”

What matters most to Licata is that he not only benefits from the Project Healing Waters program, but he can also help others, too.

“Give and take,” he says. “It’s beneficial for me because it helps me, and I can help other people. Especially with Veterans – I know I’m going to get help, and at the same time I’m helping them.

“It all happens when you give, because something good comes back to you.” On his way to winning the Heartland Region Fly Casting Championship, Steve Licata (left) displays his form while Bob Barnett keeps score. Licata’s victory earned him a spot in the national finals of the first Project Healing Waters Fly Casting Competition in August in Boise, ID. Competitors in the Project Healing Waters Fly Casting Competition were graded on distance, accuracy and the ability to cast around obstacles. Top scorers in the Heartland Region Cast-Off, Steve Licata (left) of the Greater Kansas City Program and Terry Adams of the Omaha Program compare notes on the competition. Licata won the event and a spot in the national finals; Adams finished second. This was the first year of the national Project Healing Waters Fly Casting Contest.

The Casting Competition was made possible by a grant from the Bob Woodruff Foundation (BWF).  BWF leverages its expertise and collaborative network to find, fund and shape innovative programs that help our impacted veterans, service members and their families thrive. Receiving a grant from BWF is an honor that recognizes the dedication, focus and effectiveness of our staff, volunteers and supporters. 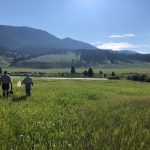 “The best one yet” – PHWFF Casper ventures to West YellowstoneRegional, Rocky Mountain Northeast 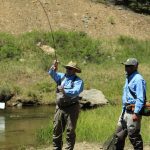