On June 27th, disabled veteran participants and volunteers headed to Tangle Lakes, Alaska – only 290 miles from Anchorage. The 5 to 6 hour drive is long but spectacular with miles of black spruce tundra and mountain ranges capped with glaciers. Following dinner and fresh homemade ice cream for dessert, everyone relocated to the day use area approximately one mile from the campground where stream fishing began around 8:30 pm. Since it never really gets dark in the land of the midnight sun, the fishing improves after 9 pm when the bugs emerge in large swarms that resemble fog rolling across the river. What fun! The next two days of fishing were awesome! The temperatures hovered around 75 – 80 degrees, a rarity in these mountains. The water was still cool and the bugs were hatching so everyone caught grayling. All you had to do was drop your fly in the water and let it drift and soon it would disappear, which was followed by “fish on”. The grayling were not picky; they took a variety of parachute style flies, renegades, Purple Haze, Cracklebacks, and beadheads. Special thanks go to numerous groups including the Bureau of Land Management (BLM) boat drivers from Glennallen and Fairbanks, AK who transported everyone down river to spots were everyone could fish easily. Wrangell Institute for Science and Environment (WISE) provided meals for the BLM and coordinated special potlucks for all participants and volunteers. The Tangle River Inn provided wonderful meals for participants during which they could view the entire lake and river system. Bob Dobranski contributed substantial financial funding for this trip as well as numerous previous trips. Project Healing Waters Fly Fishing also funded four participants from Virginia, Montana, and Idaho who were able to stay several extra days. A group of volunteers and participants at the Tangle River Inn

It was such a pleasure to host these four participants – Cheryl, Alex, Derek and Mark. They truly enjoyed their trip to Alaska and they stepped up to help out when needed. When a medical emergency occurred that resulted in a staff shortage at the lodge, they quickly volunteered to fill in as waiters, dishwashers and cooks. Thank you ever so much! 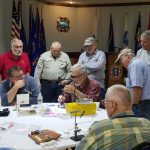 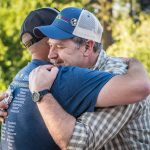