The PHWFF South Florida Program in cooperation with the U.S. Marine Corps Wounded Warrior Regiment conducted the “Backcountry Purple Heart Slam”, a two-day fishing venue during May 13-14, 2016 at Whitewater Bay in ENP, for twelve active duty/retired wounded Marines, in order to assist in their medical recovery and rehabilitation.

“This was a two-day event that was conducted in Everglades National Park.  All participants were recipients of the Purple Heart for injuries incurred during ground combat operations in either Iraq or Afghanistan.  Day-1 took place in the backcountry of Whitewater Bay with two Marines per skiff operated by a professional guide.  There were an additional two support craft with paramedics from Miami-Dade County Fire Department aboard, and two command and control craft.  Day two was conducted on the flats of Flamingo, again additional support craft with paramedics from the same agency aboard them.  Both days began at 0700 at the ramp and concluded at 1400 at the ramp.  Meals and liquids were provided via “in-kind” donation for each participant while on the water.  They had the opportunity to jump tarpon and catch snook, redfish, trout, tripletail, and an assortment of other saltwater species.   They also were able to see multitudes of bird life and other inhabitants such as dolphins, alligators and crocodiles (the only place on the planet where both co-habituate).

The highlight, or measure of success, of the event took place Saturday May14 when a young Marine was asked how his day was going so far, his response was “the best day of my life”.  A large burly guide with them looked away to conceal his watery eyes.  Later the other Marines summarized his response as their own.

There are a tremendous number of people to thank: Jet Blue Airways flew the Marines round trip for free. Local media carried their arrival.  Local businesses provided free dinners each night and a 15 passenger van for the duration of their stay to transport them from event to event and the hotel.  The participants received swag bags from numerous donors in the marine industry including ball caps, long sleeve UV protectant shirts, buffs, insect repellent, sunscreen, and assorted items.

I hope to associate the Marines with local PHWFF programs in their home of record in order to learn to fly cast.  These same Marines will be invited to attend next year’s Backcountry Purple Heart Slam and compete in the tournament the following year.” – Col. Anthony Fernandez III USMC Ret Another double hookup with Sgt Lopez and Cpl Casimiro-Moreland Boats starting off on Day-1 Guides moving the Marines to a large school of feeding redfish. Media interview at the airport Enjoying Cuban cigars after dinner courtesy of the local establishments. Fallen Warrior Table at reception on the final evening. 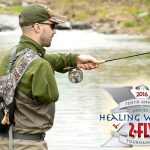