The Battle of Steelhead Alley

Two Ohio programs went to battle over the weekend.

The idea was the brainchild of Rocky River volunteer, Dan Zukie, so Rocky River’s new Program Lead, Tim Norris reached out to invite the Willoughby program to participate in the two-day steelhead tournament. Willoughby Program Lead, Diane Wantz, accepted the challenge and in three weeks’ time, both teams filled their fly boxes, checked their gear, and came up with team names. The Rocky River Reel Heroes and the Willoughby Apex Predators exchanged friendly jabs on social media in the weeks leading up to the event.

Social media was used to create energy and excitement about the event. Norris created the event poster and Wantz posted daily pictures of steelhead in the days leading up to day one. Everything was in place, but mother nature had other plans. The winter advisory kept everyone glued to the weather report and, consequently, the team numbers went down significantly the night before.

Participants were paired with volunteer guides and the pairs fished our local waters in search of Fall Lake Erie steelhead. Rules were drawn up beforehand stating how fish were to be photographed and measured; and how a winner would be chosen based on the number and size of fish caught. The losers of the tournament would be buying the other program hot dogs.

“The participants and volunteers that chose to work through Mother Nature’s curve ball were amazing,” Wantz said. “Everyone loved this tourney and are hopeful it will become an annual event. Judging from the awesome Steely Cup trophy, it will be.”

At the end of the day, Rocky River’s Reel Heroes, won the tournament with one fish.

The Reel Heroes from Rocky River will host a follow-up picnic where Willoughby’s Apex Predators will buy the hot dogs.

“I loved this event for so many reasons,” Rocky River Program Lead Tim Norris said. “The friendly competition aspect of it brought out a sense of team loyalty and enthusiasm that was a lot of fun. It was also great to see so many of our participants and volunteers working together on our home waters.”

Norris would like to thank a couple people for this amazing event.

First and foremost, Norris would like to thank all of their awesome volunteers and participants for making the event unforgettable.

“This was our first attempt at this, and we honestly had no idea how it would go. We were really encouraged by the results, and the enthusiasm generated – both within and outside of our programs. We are already discussing with PHWFF Willoughby and PHWFF Columbus how to improve this event, and we plan on doing something similar and possibly larger in the spring…hopefully when the fishing is easier and the temperatures are warmer!” Norris exclaimed.

“Next, Cleveland Metroparks Biologist Mike Durkalec for helping to spread the word about our programs via his fishing report and considerable social media following. We really appreciate this and have had several inquiries since then. PHWFF Rocky River APL Dan Zukie for coming up with the idea, coordinating it, promoting it, and making it happen in general!”

He would also like to thank PHWFF Willoughby PL Diane Wantz and APL Phil Varketta for working with Rocky River to make this happen.

“They were awesome, and the event would not have been the same without this kind of commitment from both sides!” 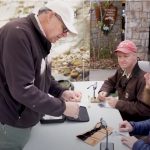 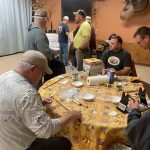