The Pennsylvania Regional Casting Contest was a huge success

Fly casting can be difficult on a good day. It can become much more challenging when trying to land your fly on a 9″ target, at 60 feet, under a time limit, with a dozen other casters and judges watching you. This is the scenario faced by the competitors at the Project Healing Waters PA Regional Fly Casting competition held on June 13-15, 2018, in Weikert, PA. The competition consisted of eight casts for accuracy at targets located between 20 and 60 feet away, followed by a long distance attempt with no target, all in six minutes. The competitors scored points at each distance for landing their fly in a 36″ circle, with additional points awarded for setting the fly on a 9″ plate in the center of the target.They also received points for the total distance of their two longest casts, regardless of accuracy. Additionally, one target was considered an obstacle cast, where the casters had to successfully land their fly on a target set directly behind another target, with a penalty assessed if their line touched any part of the obstacle target.

Ben Dolby from the Erie program was the winner amongst a field of very competitive and capable casters representing various areas of the state. When asked about what he did to prepare, he said that he asked for help from a few fellow casters in his area, then turned his attention to fine tuning his gear, experimenting with many lines, looking for the right one to match his style. “Everybody’s casting style is a bit different; finding the right feel to fit the caster makes a big difference”. Ed Transue was introduced to the Project Healing Waters program three years ago, and credits it as life-changing for him. “A lot of people go fishing to pull a fish out of a hole; when I go fishing, a fish pulls me out of a hole”, according to Transue.
Sentiments like that support the core philosophy of Project Healing Waters Fly Fishing in their mission of helping veterans to heal. It is also what motivates volunteers to give their time and knowledge to the program.

Bob Anderson is a certified casting instructor, who just recently started working with PHWFF. He offered advice to the casters, and then served as a judge for the competition. He said, “My personal perspective is that anything that I can do personally to help these guys out after what they’ve been through I do without hesitation. If there is some way that I can give them something back, after all they’ve done for us, that’s what it’s all about”.

Another volunteer is Dan Ozimek, Erie Assistant Program Lead, who has been involved with the PA program since its inception in 2011. He gets a special satisfaction in helping disabled veterans, saying “It took me a lifetime of flyfishing to learn what I know. Now, I want to give back, but I don’t want to give it to just anybody. I want to give it to a special group of people.”
With the support of all of the volunteers involved at the local and the regional competitions, the best casters in the state were able to be put to the test, giving it their all in difficult windy conditions. Despite those challenges, the casters still pushed hard. “I didn’t want to play it safe, I was shooting for the ring every time, even on the obstacle cast”, said Transue. “I really see the dedication here, I see 100% effort”, echoed Anderson. “They did better today than in the local competitions, it was incredible how much they picked up in the past few weeks”, added Ozimek.
Besides the competition aspect, the casters enjoyed sharing time with like-minded veterans at the event. Some of it is the social atmosphere of being able to form new bonds. “Competitions and events like this are just like picking back up on the camaraderie we left behind when we left the military”, said Dolby. For others, it truly is a healing experience. “Project Healing Waters means the world to me. Any time I get a chance to go to an event, my wife just says ‘go’. It keeps me going, it keeps me moving, it keeps me looking forward to the next time I get to go”, Transue said about the importance of PHWFF to him.

All of the casters and volunteers agreed that while the competition was a tough one, the ability to come together and heal with fellow PHWFF participants is always the highlight of any event.
As the winner of the PA Regional event, Dolby will travel to Boise, Idaho, in August to compete at the PHWFF Casting Competition Finals, to be conducted during the Fly Fishers International Fly Fishing Fair.

Ben Also received a beautiful box of flies tied by Jimmy Clark a Volunteer in the Philadelphia area. He said, “I’m going to go give it my best, and represent PA well”. 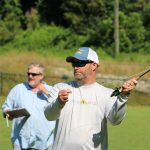 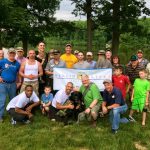 A Quiet Night at the Lake with Project Healing Waters CoatesvillePennsylvania, Regional