With you by our side we can continue bringing care and community to those who have sacrificed to protect the freedoms we all cherish.

“Just as ripples spread out when a single pebble is dropped into water, the actions of individuals can have far-reaching effects.” -Dalai Lama

I didn’t want to write about suicide. I started and stopped multiple times. Addressing it is hard. Ignoring it is easy. Nothing worthwhile is easy, so here is my story of our ripple effect and my attempt at turning tragedy into hope.

I think of him most on beautiful days. His name was Todd Gauntner and he was our Willoughby Program’s youngest Participant. As with much of life in 2020, I became aware of the news via social media. On March 23rd of that year, he took his own life and changed mine forever.

Nobody wants to get news of a suicide, or give it, but it needed to be done, so the message went out to Participants, Volunteers and HQ, shortly after I found out. After fulfilling my responsibility to the Program, I sat down and wept.

Within hours, and during the next few days, the phone rang. And rang. And rang. Participants, Volunteers and Staff called to check on me. They wanted to know that I was okay. I listened as they helped me understand what just happened, why it happened and, for some, how it almost happened to them. Labels, roles, and responsibilities were gone. We were human beings sharing a human experience. I realized the PHWFF mission wasn’t a one-way street. We needed, appreciated and were grateful for each other.

Fast forward to the one-year anniversary. I had so many questions, so many concerns. How much is too much? How much is not enough? Maybe doing nothing was best. For months, I researched suicide, grief, and tributes. I listened to the Psych Armor courses provided by PHWFF, but the answers I needed weren’t there. I was paralyzed by my indecision until a Participant called and said, “We’re doing something, right?”. I assured her we were, hung up the phone and went into panic mode. I had six days to make “something” happen and I didn’t have a clue.

Out of desperation, I reached out to a stranger. A grief counselor. During my conversation with her, my wonderful conversation with Jill, I got answers. She gave me the tools I needed to hold a tribute and, more important, the personal comfort I didn’t think I needed, but did.

So, on that Tuesday evening, we held our tribute for Todd Gauntner. Virtually.

As always, some of our regulars were from out-of-state, some were late, and others couldn’t connect. There were guests too. Todd’s sister, some friends, and a workmate. His mother. Via one device, the family and friends sat on the beach of Lake Erie and joined us. The rest of us sat in our individual homes during the introductions, as each face made an appearance to say hello.

I started by sharing the words Jill had used. The words that brought me comfort. I gave them permission to talk about the tragedy. We shared stories about Todd. We learned more about him, and each other. Surprisingly, there was laughter. By bearing witness together on this one-year anniversary, we validated what we were feeling, alone, as individuals.

In this two-dimensional gathering, the strangers proceeded to tell the family and friends how Todd was the motivation for the Willoughby Program’s engagement on social media during the pandemic. And they shared with his mother how he was responsible for creating a renewed commitment by PHWFF to strengthen our healthy community. There were tears, and lots of them from some of us, but in those 48 minutes the strangers became friends.

And then we simply ran out of things to say.

Jenna, his sister, broke the silence. She got close to the camera lens and said, “Stay with us and watch”.

She pulled back her phone, so each of us could see the “big picture”, and we bore witness, together. No one said a thing. The sun was setting. There was no wind, and the easy, rhythmic waves of the smallest Great Lake fell gently on the sand.

Most people quietly left the “chat” at that point. I lingered, along with three other volunteers and the workmate. He was another stranger really and had said nothing…until now. We listened as he told his story and what he had done that day to remember his friend. As his story finished, one of the remaining volunteers realized he knew this young man’s father, which started a whole new story. Comments were made about our “small world”, and we said our goodbyes.

Over the next week, I received numerous texts and emails thanking me for having the tribute. For giving grief a voice. For being brave and vulnerable.

And now my ripple has touched you.

You can choose to take the easy path and let it pass through you or you can choose the hard path and push back by creating your own ripple. One of change, that gets rid of the stigma and gives everyone permission to discuss suicide, as we do with heart disease, diabetes, and cancer.

I am a PHWFF volunteer, a pebble of change, and today is going to be another beautiful day.

To learn more about Holy Waters, ways you can help, and information on the online auction, please visit HERE 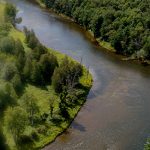 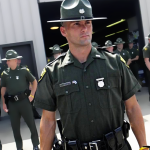