A hearty “Bravo!” to our nine participants in Wednesday’s rigorous outing on the water! You would have thought that the sun shone all day yesterday with all the beaming faces on the bus as we motored back from yesterday’s event! We heard several glowing accounts from our Project Healing Waters Fly Fishing participants.

It was a very early start and the weather was unpredictable. We arrived in a light rain at Greenwell State Park, 1 ½ hours SE of DC on the Patuxent River. Shortly thereafter there was enough of a break in the rain for all seven boats to get out and enjoy several hours of bottom fishing the local hot spots.

I was on Captain John Stillwell’s boat with Gerald Douglas and Charles Kearney. You know when real service is present when the boat Captain cuts bait for the crew. Gerald, a stroke victim, and Charles, total vision loss, had a marvelous time as they bantered over number of fish caught. They both remarked about what an accomplishment it was to be able to safely climb down the ladder! Gerald later quietly remarked to me with tears in his eyes that “being on the water is the best therapy ever!”

We know a lot of work went into organizing the event right down to the moment of embarking. From our above waterline view it all was smoothly delivered. This was a great partnership between Project Healing Waters Fly Fishing serving as the sponsor for this event, the Maryland Saltwater Sportfishing Association Southern Maryland Chapter, the Greenwell Foundation, the Maryland Park Service, and the Tackle Box of Lexington Park, Maryland.

A special thanks goes to each of the organizers and to each Captain and crew. The thoughtful inclusion of Karen Wheaton, our program’s VA Recreational Therapist and Eric the bus driver, was very much appreciated. The Captains may have been disappointed in the day’s catch but our veterans with disabilities were absolutely delighted. There were big smiles and and there was the familiar fishermen’s ribbing during the awarding of the prizes!

There were no records broken but there was enough of a catch to award prizes. Donald Ford won “Smallest Fish” with his puffer (have him show you the picture.) Robert Shawn won “Biggest Fish” with an 8” White Perch. And Gerald Douglas Harper won Most Fish”, with 7. Mission BBQ provided an excellent lunch for Participants, Captains and Crew, and Volunteers. Fully fed, we loaded up, shared a few reflections, and most got in a well-deserved nap for the drive home.

We’re very happy you all made the trip and we look forward to many more! 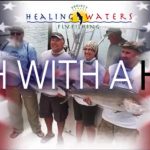 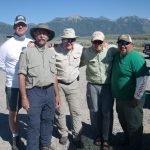