On Sunday, March 5, 2017, the Cataloochee Chapter of Trout Unlimited along with the Fly Fishing Museum of the Southern Appalachians hosted the second annual “Tie One On” tie-athon in support of Project Healing Waters.  Roughly 30 people gathered at the Rendezvous Restaurant in Maggie Valley, North Carolina to eat, talk fishing, and tie flies for Project Healing Waters participants.  Thanks to the hard work of all involved, volunteers tied approximately 60 dozen flies that will used to support the Project Healing Waters cause.

Once again, Aaron Motley of Hunter Banks fly shops in Waynesville and Asheville, North Carolina, dedicated his time to support the cause.  Among other flies, Aaron tied a large number of beautiful streamers, but more importantly, he brought along his lovely eight year old daughter, Gracyn, who expertly tied a number of outstanding San Juan worms.  Attendees were also able to view and gain inspiration from the impressive fly collection of fly collector Mike Kesselring who was kind to display his flies during the event.  His extensive collection of over forty trays of flies, which might be the largest private fly collection in the Southeast, stretched nearly wall to wall of the event space. All in all, the “Tie-One-On” tie-athon was a big success.  Rick Queen, the Project Healing Waters Cherokee Program Lead, passes on a special thanks to the Fly Fishing Museum of the Southern Appalachians, the Trout Unlimited Cataloochee Chapter, all participants, and everyone who helped put on this event and continue to support Project Healing Waters. 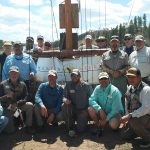 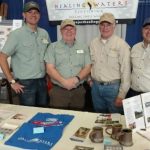 The Battle Creek Program has been busy!Midwest, Regional