As June approached, the excitement of our Tucson PHWFF participants was
palpable. This is something that happens whenever our group prepares for a
fishing trip, but this was something more than that…..this was special. Here’s a hint of where we were headed and why the extraordinary excitement.
About 600 millions years ago, this area was a shallow sea which remained intermittent
for over 500 million years. Thousands of subsequent years of volcanic
eruptions, glacial movements and tectonic movements created this beautiful slice
of heaven now known as the Grand Tetons and the Teton Valley! Within the Idaho
side of the Tetons runs the trout rich Teton and Snake Rivers. Our destination this early June was a private 57-acre ranch situated on the banks
of the Teton River.  We had been here once before and it was spectacular.
The ranch is owned by Tucson businessman Jim Click, who has been very passionate
and generous in his support of our Tucson program since its inception.
He donated this week to our group….not only the use of his beautiful
ranch house at Rockin S Ranch, but making sure his ponds were stocked with
beautiful trout and that our participants were taken care of in every way. He
even scheduled a catered event on the day of the main group’s arrival. Program Lead Jim Owen and volunteers Kathleen and David Vitelli arrived a few
days before the group to ensure we were fully stocked with food and beverages,
and the menus were ready to go. Mr. Click was already there and excited for
the arrival of the group on Tuesday. We also assessed the water conditions on
the river and found the Teton quite high due to an almost record snowfall….the
runoff had now swollen the Teton River beyond its banks with mountains still
snow covered. This was surely a sign of what to expect on the Snake River as
well. Luckily, our guide service, World Cast Anglers, are experts at their trade
and our participants would be in good hands. Tuesday came and our participants arrived. To watch their faces as they
stepped out of the van and looked around at their home for the next five days
was a joyful experience. After rooms were assigned and gear was stowed, the
group strung up rods and fished the pond and the river.  A short time later, the food truck arrived – not just any food truck but one with a
real wood burning pizza oven.  We knew this would be fantastic. The neighbors
arrived, along with the whole World Cast Angler crew. Needless to say, everyone
had a fantastic time! The guides got to meet the group and prepped them for the next morning’s adventure. On Wednesday morning, the kitchen was humming with breakfast preparation. A
few of our vets were already honing their skills in the stocked pond as they readied
for their day in the drift boat.  The group would be heading to the Henry’s Fork tributary of the Snake
River since it was the safest and most fishable in this spring thaw run-off.  The weary but happy group trickled in by late afternoon full of the
day’s fish tales and the Rainbow and Brown trout brought to hand, as well as some pretty nice-sized Whitefish, which was promising considering
a kill off in 2016 due to Proliferative Kidney Disease. Our vets enjoyed more drift boat fishing on Thursday and Saturday, leaving Friday
open as an off-day to relax or fish the ponds. A small group of vets and volunteers
chose to spend this day traveling to Yellowstone National Park and Jackson,
Wyoming, an adventure filled with breathtaking scenery, a close encounter
with a bison and lots of elk and grizzly bear sightings. Not to mention Yellowstone’s
wild and incredible geological features. Fun Fact: Did you know that
60% of the world’s geysers and hot springs are in Yellowstone National Park? On our last evening at the Rockin’ S, the participants returned from their final day
of fishing, and gathered for their final dinner. Of course, the
discussion turned to the fish that were caught and the camaraderie enjoyed
by participants and guides. Another shout out to World Cast Anglers….to
CG and the guides who arranged the week and even donated boats everyday:
Thank you! On a final note, we should mention that the biggest Brown Trout was claimed by
Terry Edwards and biggest Rainbow by Rene Suarez.  Both species are wild
species as stocking has not been done since the 1950’s.  Most important of
all, each of our participants has memories of a lifetime. For
that we are most grateful!! 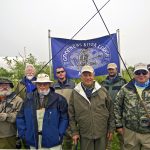