The following piece was written by Gary Rihn, a Project Healing Waters Fly Fishing veteran participant in Erie, PA.   You can find complete info, locations, and contact information for the Pennsylvania Region by clicking here While the day began cold, the sun soon emerged, warming up everybody and making for a beautiful day on the stream. The action began quickly, with one of the first fish of the day, a trophy-sized 22″ rainbow, being landed, and released, just minutes after the official start of competition. The tournament was to benefit Project Healing Waters Fly Fishing, a nationwide organization dedicated to helping disabled military veterans, through physical and emotional rehabilitation involving fly fishing and associated activities. Their motto is “Healing Those Who Served”. They do this by getting them out fly fishing with other like-minded veterans, along with offering fly tying lessons and sessions at various Veterans Administration facilities throughout the country.

According to Skip Hughes, PHWFF’s PA Regional Coordinator, this year’s tournament included 17 two man teams comprised of both military veterans as well as non-military participants. The civilian fly fishers paid an entry fee to participate, while the veterans were sponored by donations from various companies, organizations, and individuals.

In addition to those who were fishing, there was a large turnout of volunteers who supported the event by serving as scorers/measurers on the stream, shuttle support driving UTV’s, centralized admin, and food preparation, amongst other duties.

Kathy Thomas, one of the volunteers, said that she was always very proud of service members. Besides having two sons who served in the Air Force, her husband Dave is the Program Lead for the Altoona chapter of PHWFF. Kathy said that Dave’s position “allows him to combine his dedication to serving veterans and his own passion for fly fishing, a win-win situation”.

Amongst those who were fishing, there were very mixed results during the day. Whether due to ability to read the water, fly choices,  presentation, or just plain old good luck, some participants were much more successful than others, though everybody agreed that just being on the water with a fly rod in their hands, amongst friends, was worth it. One of the most successful was Guy Murray, who along with his partner Tia Drew, took the top overall team win, along with landing the largest fish of the day, a beautiful 24″ rainbow. While some participants were quite experienced, others were rather new to the sport, some being introduced to fly fishing for the very first time courtesy of PHWFF.

Murray said “I absolutely love vets’ attitudes and watching them progress”. He said that he gets great pleasure in helping to teach veterans how to fly fish. “Nothing is better than seeing somebody catch their first fish on a fly”, according to Murray.

Among those who did catch fish during the tournament, results were rather impressive. There were a few 20+” fish landed, a few more lost, and almost all of the other fish landed were in the mid-to-high teens in length.

Troy Donahue, a Marine Corp veteran, managed to land a 21″ rainbow. He said that PHWFF has done a lot for him in the past three years that he has been involved with them. Donahue was surprised to learn at the end of the day that PHWFF was sending him on a dream fishing trip to Montana later this year.

“It’s a trip I’d never do on my own, that’s the beauty of PHWFF”, said Donahue. He added, “I owe a lot to these guys. It gives me a chance to meet some great people, and to do something interesting with other guys going through the same thing”.

PHWFF relies on donations and fundraisers such as the Yellow Creek tournament to be able to provide opportunities such as that presented to Donahue. Veterans are not charged anything for the outings, trips, or fly tying classes where even the equipment and supplies are provided to turn out flies, many of which were used as a source of personal pride in the tournament.

Though the Yellow Creek tournament was a personal competion, most of the outings are meant strictly as relaxation, providing comaraderie and relaxation for the veterans. At many of these outings, they are even provided with guides to assist them in having more success.

One of those guides is Brad Crawford, who has volunteered his time and expertise for the past ten years to guide other veterans. “Seeing the smiles on their faces and the calm in their minds is what keeps bringing me back”, said Crawford.

That calm and mental break provided by fly fishing is a cognitively proven therapy, according to Murray, who holds a Masters degree in Psychology.

“Fly fishing is totally engaging. You cannot think of other things while fly fishing. That helps veterans escape mentally by putting all of their focus on something calm and enjoyable”, said Murray.

Many veterans, when asked about getting into fly fishing and involved with PHWFF, said that it had helped them immensely, and had been crucial as part of their therapy. Some credited it as life changing for them. And all were deeply appreciative of those who came out both to fish with them and to volunteer, as well as the support from outside businesses that all helped to make the tournament a success.

Thomas expressed, “These veterans totally deserve every praise and appreciation for what they’ve done and given”. 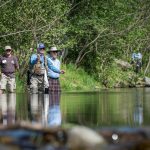 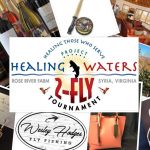