On June 17, 2017 the Newington VAMC Program was welcomed at the Limestone Trout Club for a memorable day of angling and camaraderie.  Assistant Program Lead Don LaChance recounts the day below:

13 veteran participants, including one new veteran, attended the event alongside 18 volunteers, 3 VAMC representatives, and 4 members of the Limestone Trout Club who served as support for the participants during the day.

One vet who had never caught a trout before, Ron Buxton, caught 12 fish including a 20” rainbow and a 17” brown.  Ron was awarded a Limestone mug for his accomplishment.  We did discuss banning Ron from future events to make it fair for the others but, in his defense, he caught a half dozen of his fish and passed the rod on to other vets to allow for them to get the feel of a catch and reel one in as well.  Ron was a real team player. Jim McSweegan, a new member of our group, also caught a 19” rainbow.  This was his first trout on a fly as well.  Jimmy is hooked and looking forward to our next fly tying session where he will tie his first fly. Eddie Franco caught a 19.5” brookie on a dry fly.  After the fish, he sat on the deck of the clubhouse for the rest of the day telling and retelling the story to all that came by saying “It doesn’t get any better than this”.

Not all caught a fish but since this was a team effort and some 30ish plus fish were brought to the net, it was determined on average, all caught a fish.  It is important to note that some of the fish caught were on the flies that the vets tied so they do know their hard work did produce some great results,

At lunchtime, all were treated to a gourmet lunch consisting of burgers, dogs and for those on the cutting edge, cheeseburgers by our gourmet “Grill-masters” Bob Schaefer and John Ferrantino”.  The menu was rounded out with coleslaw, chips, some veggies, watermelon and of course 180 VA “Home-baked” chocolate chip cookies. There were 2 casualties during the outing, 2 of our fly rods broke based on the size of the fish but, that was a small price to pay and only added to the story of the fish that were brought to the net.

Our next fly tying session is scheduled for Thursday, 6/29 at the VA in Newington, CT.  During that meeting, we will be tying flies for our next scheduled outing in August on the Farmington River. 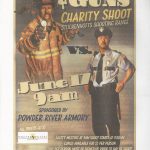 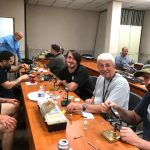 Coatesville Project Healing Waters Gearing Up For A Showdown With CARPDADDYPennsylvania, Regional