A few veterans and volunteers from the Walter Reed program of PHWFF attended a 9/11 outing at the Conewago Conservationists in Pennsylvania for a day of fishing and remembrance. A few fish were caught and many stories were told about that fateful day.

“We wanted to keep it an intimate outing,” Program Lead Larry Braswell said. “So we only had five veterans go this time, when normally there isn’t a limit.”

Braswell said that although the creek was clear, he doesn’t feel like the fishing were biting as well since Hurricane Ida just tore through that area.

“Everyone caught fish, except for one veteran. Catching a fish doesn’t matter though, they are just happy they are back out in nature, and back together.”

When they broke for lunch, the veterans sat around and remembered 9/11 and reflected on where they were at on that fateful day.

“It was interesting to hear where everyone was and what they were doing,” Braswell said. “It can trigger a lot and bring back memories, so it was a tough day.”

Braswell said that they did learn a valuable lesson that day: in the heat of the moment, you have to let the guide do ‘guide stuff’.

“One of our participants who used to be in the Walter Reed Program was catching his third fish of the day, and all of us got so excited, we mishandled the situation and committed so many cardinal sins when it comes to handling fish,” Braswell laughed. “It was definitely a teaching moment and a reminder to us to let the guide do their job.”

Braswell said that despite the heavy emotions of the day, the participants love going out to this place, and it was just a beautiful day to fish.

“It was a great day with some good guys!” 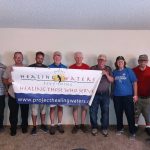 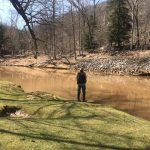