West Virginia Veterans Take to the Rivers with PHWFF

Every year since 2014, PHWFF participants have gathered on the banks of the Greenbrier River in West Virginia and celebrated the annual outing of Thornwood.

Programs from all over the state and surrounding areas would gather on the first weekend in June for a weekend of comradery, education, and of course, fly fishing.

Unfortunately, due to COVID-19, Thornwood has been postponed in 2021, but many programs were able to go on outings separately over the weekend.

PHWFF Parkersburg Program were able to get out on a pond for their biggest outing yet of 2021.

A total of 12 participants and volunteers headed out to property and a pond owned by Waste Management, and enjoyed being together again, catching up, and doing some fly-fishing.

“The property and the pond at Waste Management was wonderful, and a great, easy location for all of our participants and volunteers to get to. We appreciate their support, and will definitely be using that property in the future,” Holt said.

Meanwhile, 100 miles east, the Morgantown Program of PHWFF got out to the south branch of the Potomac River at the Smoke Hole catch and release area.

The group of six rendezvoused for breakfast at Denny’s and then arrived at the location around 11 A.M.

“The fishing was pretty slow,” Program Lead John Bell said. “The water flows were decent, but the water temperature steadily climbed throughout the day.”

Although they saw a few trout rising, they wanted nothing to do with the flies they were tossing at them.

“Participant Mike Chewning missed an 11-12″ rainbow after only being on the water about a half an hour,” Bell said. “This was pretty cool as this was his first initial foray with a fly rod!”

The group broke for lunch around 2 P.M. and had a spread of hamburgers, hot dogs, coleslaw, macaroni salad, chips, cookies, water and Gatorade to refuel on.

Dan Headley, the assistant program lead was able to catch a smallmouth on a stimulator, and had several trout toy with him on the same fly.

Many of the participants had never been to this scenic area before, so it was an adventure in itself just to have the opportunity to explore it.

Bell would like to thank Amy Milne, the program manager for her patience, time, and efforts. He would also like to thank Dan Headley for helping to pull this event together.

Finally, to the south of the state, the Clarksburg PHWFF program was able to get out over the weekend and Program Lead Brandon Rudisill sent in a few pictures of their adventure. 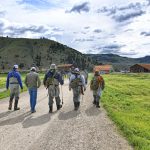 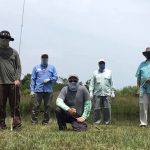