Exceptionally cool summer weather and aggressive fish provided the Veterans from the Winchester Healing Waters Program with some overwhelming excitement and many lessons learned at the Leetown Science Center Trout Hatchery, Saturday, 18 June.

All of the five the Veteran participants under the coaching of seven volunteer guides caught multiple fish, most using a fly rod for the fish time.

Based on recent casting and educational clinics prior to the outing, the neophyte fly-fishers met the objectives for the outing: assembling the rod and properly stringing the line and leader; selecting a fly; presenting a good cast; hooking and landing a fish; and properly releasing it.

Although finding, presenting and attracting the fish seemed to quickly become routine for many of the new fly anglers, setting the hook and fighting some of the larger rainbow trout (sizes ranged from 12 to 20 inches) quite often proved hard lessons as many fish escaped to fight another day.

The Vets also enjoyed some friendly competition. Volunteer guides using the honor system tracked the results during the outing that ended at noon. Awards were given for: the first fish – Christen Erin; the most fish – Charles Smith; the biggest fish – too difficult to verify so it was tie between Paul Arienti and John Kennedy; the most fish of one species other than Trout – Paul Arienti for 10 monster Blue Gill; and the last fish of the day – Christine Erin. Project Healing Waters provided t-shirts, ball caps and assorted fly boxes and tackle as giveaways to the participants for the outing.

Many thanks to the volunteer guides for their support and expertise in helping support our Vets and the program for the outing including: Mike Smith, Jim Stonestreet, Jessica Michie, Ryan Sheehan, Pete Smith and Galen Hart. A special thanks to Sandy Hart as our volunteer nurse, safety person and group photographer.

Winchester Healing Waters would also like to thank Frank Roach for his continued support in allowing our Veterans access to this first-class facility. Frank, a Marine Vet, takes great pride in supporting our Veterans and the care and pristine maintenance of his grounds and facility is a testimony to that commitment.

Veteran Charles Smith shows off one of his 10 Rainbows he landed during the outing.

One of the many Rainbows netted during the Winchester Healing Waters Fly Fishing Outing at Leetown. 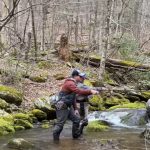 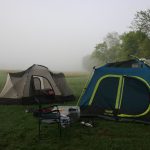