Wipers On the Fly With PHWFF Indianapolis

The PHWFF Indianapolis Program took an unusual turn this past Saturday as stream conditions forced a late cancellation of the planned trout outing to our local tailwater fishery.

Long time PHWFF volunteer Todd Settle suggested that we try to throw some flies off the beach for wipers at Monroe Reservoir in southern Indiana. A wiper, also known as a whiterock bass, is a hybrid striped bass.

As it turned out, that was a great call. The CRM made it easy to reconnect with everyone who had accepted the invite and reschedule with just a couple of clicks.

The wiper is actually a cross between a white bass and a striped bass originally produced in South Carolina but now is widely distributed throughout the United States. The fish are found marauding in the fall as winter approaches. And can be feeding. Or not. That’s fishing.

In the dawn’s early light, volunteers and PHWFF participants wadered up, partnered up, and hit the beach with 8 wt. fly rods in hand, wading into the glassy quiet water. A few casting strokes were refashioned and refined to knock off some rust. The dreaded (shhh,) wind, the bane of the fly slinger had not yet been alerted that there were fly-fishers about.

A couple of volunteers had briefed the participants on the how-tos and the flies that would be needed.

“Something big and white and flashy. Or a Clouser.” Veteran participant and fly-tyer Tom Reust had provided chartreuse and white Clousers for all. The briefing continued. “Wade out to your comfort level, cast out a far as you can and strip line. And, hold on! If you find one, there are others.”

The first fish was hooked within the first five minutes and the game was on. Nearly everyone caught multiple fish, some surprisingly large ones landed and released. Being within a flyrods length of each other took the morning chill off and the camaraderie was on. The smiles, laughter and sharing of flies, the exchange of fly rods, “try this one”, or “try to slow your backcast a little”, “cast in there where I was” and fishing spots shared brought the mission of this Program to reality.

It all came together on a Saturday morning just off the beach in Indiana. 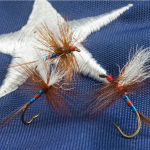 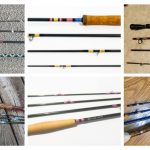