Ray Babineau is the Regional Coordinator for the Virginia Region and has been a fly fisherman for 65 years.  Ray began volunteering with Project Healing Waters Fly Fishing (PHWFF) with the Fort Eustis Program, first as volunteer and then as Program Lead in 2008.  His early responsibilities included operating that program and founding a new program at the Hampton Veterans Administration Medical Center. His role included fly fishing instruction, planning, fund raising and executing and guiding on outings.  Ray became Deputy Regional Coordinator of the Virginia-West Virginia Region in 2010 and then became Regional Coordinator, after West Virginia was split off as a separate Region, of the newly formed Virginia Region in 2012.  Since becoming Regional Coordinator, he is responsible for the formation of new programs in Tidewater (Virginia Beach Area), Fredericksburg, Skyline (Lynchburg), South West Virginia and Hot Springs.  His service was recognized in 2016, when he received the PHWFF Phil Johnson Exceptional Leadership Award.

Ray Babineau holds a Doctorate in Curriculum Theory and Design.  He worked in the field of Higher Education as a Full Professor, the Director of Institutional Planning and the Director of the School of Education at Bloomsburg University of Pennsylvania for 24 years.  He was also CEO of University Associates, an Educational Consulting firm for 35 years and served as a consultant to over 500 school districts, colleges and universities.  The firm provided consulting in planning and facilities development as well as school policy and regulation development.  Ray has used his educational background as a Trainer at numerous seminars for Project Healing Waters Fly Fishing.  He has also developed some training materials. Ray has encouraged Bob Crawshaw, his Deputy Regional Coordinator to develop and conduct a Guide Seminar semi-annually for the Virginia Region.  Ray has also taught the Seminar in Bob’s absence.

He currently resides in Williamsburg, VA with his wife Fran and his faithful dog Bailey. 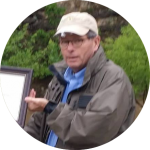