Project Healing Waters Anchorage sponsored a special volunteer recognition ceremony on May 12th and awarded the Distinguished Service Award to Mike Harsh at the event. Todd Desgrosseilliers, President and CEO of Project Healing Waters Fly Fishing, presented the award to Mike and several other dedicated volunteers who have been part of a leadership team since the program began in 2010. Mike grew up in Elmira, New York where he learned to fly fish the Finger Lakes region. He spent 27 years in the Air Force retiring at the rank of Chief Master Sergeant. Mike’s career was focused in air defense, both ground and airborne. He served as the Operations Superintendent 962nd Airborne Warning and Control Squadron (AWACS), Alaska NORAD Region Operations Control Center Superintendent and Senior Enlisted Adviser 11th Air Control Wing. Following his retirement in 1995, he and his family remained in Anchorage.

In 2005, he joined Alaska Fly Fishers (AFF) and served as a member-at-large on their board of directors for two years. Mike was instrumental as the Anchorage Program of Project Healing Waters Fly Fishing (PHWFF) was initiated with AFF and has remained a key leader since that 2010 founding. He’s contributed at equipment manager, donations manager and as leader of a new satellite Fly Tying Clinic at the Wasilla VA facility among so many other efforts. The Wasilla sessions now meet weekly due to Mike’s strong relationship with the VA, local military community, and the cadre of PHWFF volunteers he has trained. He provides fly casting instruction, fly tying demonstrations, and rod building instruction and takes participants fishing on local lakes to polish fishing skills while float tubing.

Through numerous sports shows and special fishing events at local businesses, Mike has exposed active military and disabled veterans, as well as the general public, to the art of fly fishing and the goals of PHWFF. He is also recognized widely for his decorative flies depicting armed forces medals and decorations on hooks. These mementos of service are meaningful to so many in the area and also serve as a fund-raiser for PHWFF.

For Mike it’s not just donating time but freely giving of his talents and emotional support for veteran participants who might be struggling. He invites participants to his home for extra help with fly tying and provides mentorship/friendship. Mike is a gentleman who is always engaging, friendly, encouraging, helpful, and participants benefit greatly from his gentle spirit. 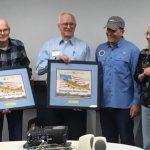 Frank Stevens Recognized for His Commitment to PHWFFAlaska, Regional