Have you entered a fly in this years competition? The submission period closes on October 1, 2022. Contact your Program Lead to started. Only registered participants in the PHWFF program who are registered in an active PHWFF program are eligible to submit flies. Professional or sponsored fly-tiers are not eligible to participate. Click here to learn more

Contact us at competitions@projecthealingwaters.org for more information and help submitting your fly.

We caught up with a few Fly Tying Competition winners to see where they’re at, how they’re doing, and to pick their brain for advice and tips ahead of the 2022 competition.

“I wanted to create a fly that would hit home for veterans,” Joseph Noe said of his second-place fly in the 2020 PHWFF National Fly Tying Competition.

“With a campaign ribbon, that’s something every veteran can connect with, no matter the branch or the war. When I look at a Vietnam ribbon, I get the same feeling from looking at an Iraq or Afghanistan one. I wanted to create something to make a veteran remember the good times, and not just the bad times.”

“PHWFF saved my life. I was in a really dark spot. It hit home for me when I started fly tying. It gives me a break from my everyday stress and memories.”

Noe said it is really hard for him to find something that stops his brain from ‘going in circles’, but with fly-tying, he has found his peace.

“With fly-tying, I am able to sit down and focus. I don’t have time to think about all of the other stuff that is in the back of my brain.”

After the competition last year, Noe started tying campaign ribbons for other veterans, and then sending them to veterans across the country, displayed in a shadow box. Noe said sometimes he gets to give the veterans their flies directly, or video chat with them as they see the flies for the first time.

“Watching these vet’s faces light up, it’s always so nice and almost indescribable.”

“I mostly just wanted to showcase that the flies were campaign ribbons themselves,” Noe said. “Anyone who didn’t deploy to Iraq might not know what the ribbon really looked like.”

Noe was inspired to submit an entry last year simply by just wanting to connect with other veterans around the organization.

“I love that we are a military organization and supports veterans of all eras, not just post-or-pre 9/11 veterans.”

Noe said he really enjoyed watching the other flies come in; to see where people were from and what flies were local to them.

As far as advice for people on the fence about submitting, Noe says, “Just do it.”

“The military taught you one thing, and it’s always ‘go forward.’ Push yourself and if it’s something you want to do, just do it.” .Sgt. Joseph Noe (Ret) grew up in East Tennessee and Southwest Virginia with my grandparents. During high school, Noe entered the AFJROTC program for three years and reached the rank of Cadet Chief Master Sergeant. Noe served in the United States Army from 2003 until December of 2007, when he was medically retired due to PTSD and multiple physical injuries. In 2019, Noe was introduced to Project Healing Waters Fly Fishing in Knoxville, TN. Fly fishing and tying with PHWFF has been a great hobby for him because it helps him to free his mind from thinking about the past. Being able to relate with the volunteers and build friendships with other disabled veterans like himself has helped Noe become more social and open to other people.  Last year, Noe entered the annual PHWFF National Fly-Tying Competition and was awarded second place at the beginner level. The fly he chose to submit was an OIF ribbon on a Stimulator. Since the competition, Noe has continued tying this fly for several other OIF veterans, as well as designing flies with other campaign ribbons for veterans around the U.S.

“I really like the history of flies,” Bernard “Gary” King said. “That’s why I don’t really develop new ones.”

“Take the Prince nymph for example, I believe they were called ‘brown fork tails’ until David Prince got a hold of some.”

King picked the Prince Nymph to tie in 2020 because of its difficulty.

“I had tied a Copper John the year before, and I think the tails can look really good if you get them at the same angle.”

With the difficulty of the tails and the wings and getting them the same size and angle, King says that difficulty helps get him more points from the judges.

“I am not a good photographer,” King laughed. King worked diligently to tie the flies before the deadline, and then he had a friend with better camera skills then him come over and help him take photos.

“We probably took over 100 pictures of the flies. Trying to get the right angles and lighting.”

“I just like learning about the history behind the fly before I start tying. Both the research and the tying helps take my mind off of things.”

When the pandemic hit, King felt like it was an opportunity to do something good for other people, and taught fly-tying virtually with his program.

For anyone on the fence about whether to make a submission, King said he would be more than happy to help.

When asked about his favorite part of the competitions? 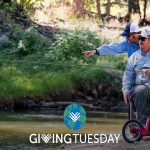 Healing Those Who Serve on #GivingTuesdayUncategorized 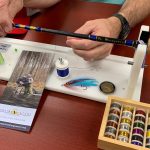