We are honored to announce that Ed Hospodar, accompanied by his esteemed father, John Hospodar Jr, will deliver the keynote address at ‘Healing on the Fly: New York City’  on October 3, 2017 at The Metropolitan Club. Edward David “Boxcar” Hospodar was born February 9, 1959 in Bowling Green, Ohio and raised in Mississauga, Ontario.  He is a retired American-Canadian professional ice hockey defenseman who played nine seasons in the National Hockey League (NHL) for the New York Rangers, Hartford Whalers, Philadelphia Flyers, Minnesota North Stars and Buffalo Sabres.  Ed went on to play in 450 NHL games, scored 17 goals and had 51 assists, with four goals and one assist during 44 playoff games.  He acquired 1314 penalty minutes during his regular season games, and 208 penalty minutes during his playoff games. He retired from hockey in 1988.  Hospodar received his nickname in junior hockey after a writer deemed the force of his checks to be commensurate with that of a “runaway boxcar”

Ed is the son of John Hospodar Jr., a U.S. Army veteran who landed on Utah Beach in Normandy, France on June 6, 1944 – D-Day – as part of the 90th Infantry Division (“the tough hombres”) and later participated in campaigns throughout Northern France, the Rhineland, Ardennes, Central Europe, and later, occupied Germany.   During his time overseas, his father first showcased his penchant for a “good deal” earning the nickname “Rations” for his keen ability to barter and budget.   After returning stateside, he utilized the GI Bill to put his keen business acumen to work, eventually earning his degree and a job with the Campbell Soup Company that would span 37 years and see him retire as Vice President, Controller for International Operations.  During that time he raised a family of four alongside his wife Rita.  The family adhered to his code of “fair, firm, faithful, forgiving, and fun” and is evidenced by the way he, and his family, lived each and every day.

We are honored to have Ed Hospodar and John Hospodar Jr. as keynote speakers at Healing on the Fly New York City on October 3, 2017.  This special evening at the Metropolitan Club will feature a cocktail hour with silent auction, seated dinner, a short program featuring a live auction and special guest speakers such as Presidential Leadership Scholar LtCol (ret) Justin Constantine, USMC. All proceeds from the event go towards providing the thousands of injured and disabled veterans we serve annually with the support they need on their journeys to recovery.

Learn more about Healing on the Fly : New York City by clicking here 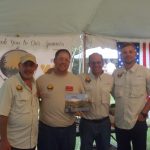 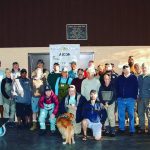 Angling and Fellowship: The 2nd Annual Smallmouth on the Roanoke (VIDEO)Regional, Virginia