In August 2010, Carolyn Emery was close to becoming one of the 22 veterans a day lost to suicide.

“I had lost my job, lost my identity, and the thought was lurking that I may become one of them,” Emery said.

“I found these guys and it gave me the will to live.”

Emery’s dad served in the Army in the Pacific Theatre during WWII and they moved around a lot when she was growing up, but one thing remained constant: fishing.

“I have some of the greatest memories of fishing with my Dad while growing up,” Emery said. “I carry his WWII dog tags with me whenever I go fishing.”

Upon graduating from high school, Emery also decided to join the Army and follow in her dad’s footsteps.

“He was a big reason I decided to join. Integrity was a cornerstone of his and the relationships he had with other (veterans) was something I wanted to be a part of. Also, I didn’t know what career path I wanted to take in life, so I figure four to six years in the military would provide me some direction.”

Those six years quickly turned into 21 years, and Emery retired in 2003 as a U.S. Army Master Sergeant.

After retirement, Emery took a civilian job in Alaska and learning how to fly-fish was high on her bucket list.

That’s when she met the infamous Cecilia “Pudge” Kleinkauf, the founder and owner of “Women’s Fly Fishing” in Alaska.

Emery took beginner fly-fishing and fly-tying classes with Kleinkauf, and soon after that Kleinkauf had her fishing all over Alaska, including the Kenai River and up in Denali.

“Fishing has always provided me with stress relief and provides me the resilience to keep on fighting my medical conditions,” Emery said. “Within 15 minutes of being on the water, I couldn’t tell you what I was previously stressed and worried about.”

Emery then moved to the south and got involved with a few non-profits such as Casting for Recovery, and eventually Project Healing Waters Fly Fishing. She started competition fly-fishing in 2011 when she became a member of Team Dead Drift, Georgia’s first competitive fly-fishing team.

“I have learned so much through competitive fishing; you’re continually learning.”

They only received about 35 applications according to Emery, and her and five other women were chosen in March 2021 to represent the new team.

“I think it came down to the six of us having more competition experience, but next year is fair game.”

With the challenges of COVID-19, the team was finally able to meet up in Pennsylvania and compete in their first competition together.

“I’m a proud participant,” Emery said. “I look forward to being a member of the USWFFT, which will be a huge honor and privilege to be an ambassador to the United States as a civilian.  This will be different from the years when I wore my U.S. Army uniform. I’m looking forward to the challenges and all of the new things I will learn and my circle of friends and support will continue to grow.   I’m lucky and so do appreciate this special opportunity given to me.”

Emery gives her most thanks to the Atlanta Program of PHWFF.

“The (people) in that program have helped me through it all. They have been my biggest cheerleaders and supporters.”

“(PHWFF) changed my life and now I have a purpose and a place where I belong. The best thing about PHWFF is that it is open to any veteran of any period of service. So kudos to PHWFF for it’s inclusivity.”

Emery would like to encourage every veteran to give PHWFF a try.

“I can’t say enough about it. It absolutely did save my life and if we could reach just one of the 22 veterans a day we lose, then it’s not for nothing.”

In whatever spare time Emery gets this summer between practice and competitions with the USWFTT, she plans on entering the 9th Annual Fly-Tying Competition for her first time.

“I don’t know what I am tying yet, but my mentor is meticulous and he will point me in the right direction,” Emery laughed.

You can see last years winners HERE and learn more about the USWFFT by following this link. 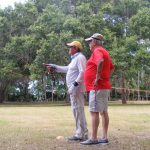 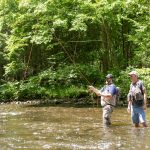