Dan Durgan already had been enjoying a great morning of fishing at Fountain Bluff Park in suburban Kansas City, catching fish after fish on a white marabou jig that a fellow angler had shared with him the previous day. Then the day went from great to unforgettable.

“I was fishing with a friend, and got this fish on and I said to him, ‘Jeremiah, this fish is serious, this is a big fish,’” he says. “He had the net, but this fish was so big Jeremiah just grabbed it and throws it on the shore. I only had 2-pound tipped on, so I couldn’t just drag him onto the bank.”

The fish, a winter-stocked rainbow trout, measured 21-1/2” long, with a 15-1/4” girth, and weighed in at 5 pounds. “I was out there the week before and lost a big one in that same hole – might have been the same fish,” Durgan says. “Then I lost another one the day before because I didn’t have a net – shame on me.

“There was another trout fisherman there, another Vet, and he showed me what he was using. I tied a dozen of them that night and went out first thing in the morning. I was slaughtering them, and then I hooked the big one.”

A participant in the Greater Kansas City Program of Project Healing Waters Fly Fishing, Durgan is a U.S. Army Veteran, serving from 1967-79 on active duty and until 1984 in the Army Reserves, reaching the rank of Sergeant.

Durgan enjoys fishing the winter trout season, but he also fishes for warm water species. His favorite rod – a 9-foot, 5-weight – is always with him. He built the rod himself, part of Project Healing Waters Fly Fishing’s National Rod Building Competition.

“I love it because it feels so good, and because I made it,” he says. “I took it out last year I don’t know how many times, caught probably 200 trout and at least 20 bass. The same rod probably caught a hundred crappie in one day, and 14 bass, including one that went seven, seven and a half pounds.”

The Greater Kansas City Program’s annual trip to Rockbridge Trout Resort is another of Durgan’s favorite outings. Durgan enjoys tying his own flies as well as building his own rods. The feeling of accomplishment makes the fishing that much more special to him. He is grateful to the Bob Woodruff Foundation, DVNF, and the Hook & Hackle Company for their support of the rod building competition and their support of Project Healing Waters Fly Fishing.

“I appreciate them donating the rods and allowing me to build one, and to meet these guys here,” he says. “It’s been good for me, it got me out.”

The purpose of the Rod Building program and Competition is to expand the therapeutic experience for PHWFF disabled veteran participants by giving them the experience of building their own fly rods to further their physical and mental rehabilitation through the sport of fly fishing.  The rod building program also has a fun competition component which gives participants the chance to win prizes for their rod building abilities.  Thanks to a generous grant from the Bob Woodruff Foundation, additional funding from the Disabled Veterans National Foundation, and support from The Hook & Hackle Company we’re bringing this great activity to even more programs and participants in 2018.  The 2018 Rod Building Program and Competition began on January 8, 2018 and will end on April 13, 2018. 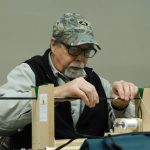 The Rod Is a Keeper, Even if the Fish Got AwayAnnouncements, Regional, The Heartland 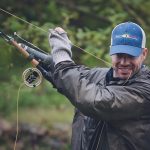