The Battle at Boxwood: Veterans find healing and community in a sleepy Colorado town

The 8th Annual Battle at Boxwood took place on Saturday July 21, 2018 at Boxwood Gulch Ranch in Shawnee, Colorado. It was a truly special day and we’re deeply honored by all those whose great contributions made this another incredible year for the disabled veterans we serve.  Special thanks to Event Director Steve Payne, Kim Payne, the Mauritz family, CACI, St. Croix Rods, Cortland Line and the whole host of generous patriots whose support and dedication to our cause made this a year to remember.

Nathan Rudolph, a volunteer leader with our Grand Junction, CO Program writes a short synopsis of day below:

The 8th Annual Battle at Boxwood was a remarkable success with over $35,000 raised! Located just 60 minutes outside of Denver Colorado, Boxwood Gulch is a world class fishery with many of the fish being of trophy size. The property is in the small township of Shawnee, with a population of just 66 residents most folks are bound to not even notice the town… Unless you are a Fly Fishing addict! Boxwood Gulch is a privately-owned ranch with three miles of the North Fork of the South Platte river running through the property. For the past seven years Dan Mauritz and his family have been generously opening their hearts and their property to host Battle at Boxwood. The event, a fundraiser for disabled veterans through Project Healing Waters (PHWFF) draws quite the crowd. This year was no exception as PHWFF veterans, local fishing guides, volunteers and celebrity anglers descended on the sleepy town of Shawnee, CO.

It was a beautiful day for fly fishing and all the hub-bub associated with an event such as this. There were casting instructors, fly trying seminars and knot tying classes and plenty of fishing. Not to mention the spread put on by both the local VFW chapter and Bruce Conrardy of the All-American Beef Battalion. Bruce served up potatoes au gratin, beans, steaks the size of a thirty-inch brown trout and Rocky Mountain Oysters… which are not really oysters, I will let you Google that one yourself! David Folkerts from PHWFF headquarters flew in from Maryland and attended this year’s event. The fishing started off strong and ended a with slow fishing as the warm weather and clear skies forced the fish into the deeper pockets. Though all was not lost as there where some amazing fished landed and lifelong friendships made. One of our very own Grand junction PHWFF participants Dan McLaughlin hooked into a hog of a brown trout. The fish was so big, the guide dove in after it and was heard shouting on his way into the water “I WANT THAT FISH!”. Unfortunately, the fish went under a rock and broke off for a long-distance release. The smaller rainbow Dan landed latter was only eight pounds and put a Cheshire Cat smile on his face. Accommodations were provided for the veterans from the fine folks at the Bailey Inn and allowed for some stocky fishing the night before the event. 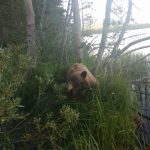